Monday brought about another round of selling, at least in the morning. All of the main indices were down sharply in the morning session, but they reversed course around midday and three of the four finished with gains. The Nasdaq led the way with a gain of 0.74%.

The S&P notched a gain of 0.18% as the second best performer and it was followed by the Dow with a gain of 0.14%. The Russell never made it to positive territory and finished with a loss of 0.33%.

[hana-code-insert name=’adsense-article’ /]Eight of the 10 main sectors moved higher on Monday with the tech sector leading the way with a gain of 1.38%.

The energy sector suffered the worst loss yesterday at -1.59% and it was joined in negative territory by the financial sector with a loss of 1.35%.

My scans flipped sides on Monday night with 16 bullish signals being produced and only four bearish signals.

That is the first bullish skew in seven trading days. The barometer jumped from -47.7 to -19.4, but remains in negative territory for now.

I finally have a bullish trade idea for you today after six straight bearish ones. Verizon Communications (NYSE: VZ) appeared on the bullish list last night and the combination of the chart and the fundamentals got my attention. The company scores a 78 on the EPS rating and a B on the SMR rating. These are both good readings—not great, but pretty good. 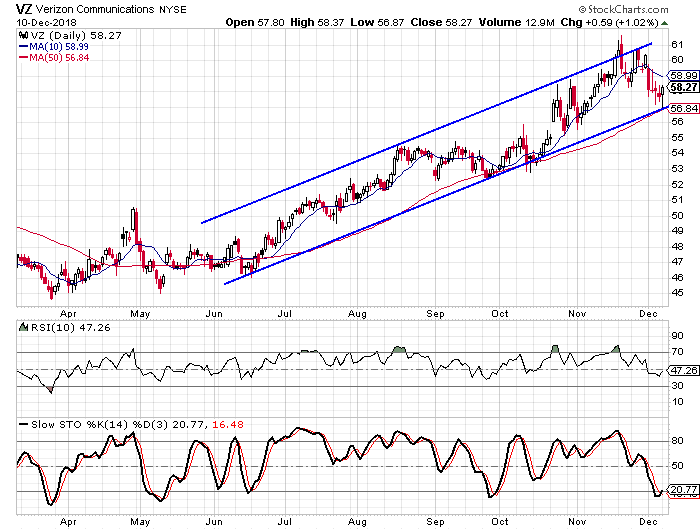 Verizon has managed to maintain an upward trend over the last six months and given how the market has performed during that time that is an impressive feat. A trend channel has formed on the chart and the stock just hit the lower of the channel and bounced. It is also worth noting that the 50-day moving average is in synch with the lower rail and that means that are two layers of support for the stock.