Friday was another rough day for stocks with all four indices experiencing sharp losses. The Nasdaq got hit the hardest with a loss of 3.05% and it was followed by the S&P with a loss of 2.33%. The Dow dropped 2.24% and the Russell was the best performer, but still lost 1.98%.

Nine of the 10 main sectors declined on Friday with the utilities sector being the lone one in the green on the day with a gain of 0.37%.

[hana-code-insert name=’adsense-article’ /]The tech sector was the worst performer with a drop of 3.52% and it was the only one that lost more than three percent.

My scans were negatively skewed for the sixth straight night with 20 bearish signals and five bullish signals.

The barometer did move higher after these results were added in, climbing from -64.9 to -47.7.

As much as I would like to offer you a bullish trade idea, there just haven’t been any stocks that I have liked enough to give you one.

Once again I have a bearish trade idea for you. Docusign, Inc. (Nasdaq: DOCU) appeared on the bearish list and the company doesn’t have the best fundamentals. It scores a 44 on the EPS rating and a D in the SMR rating. 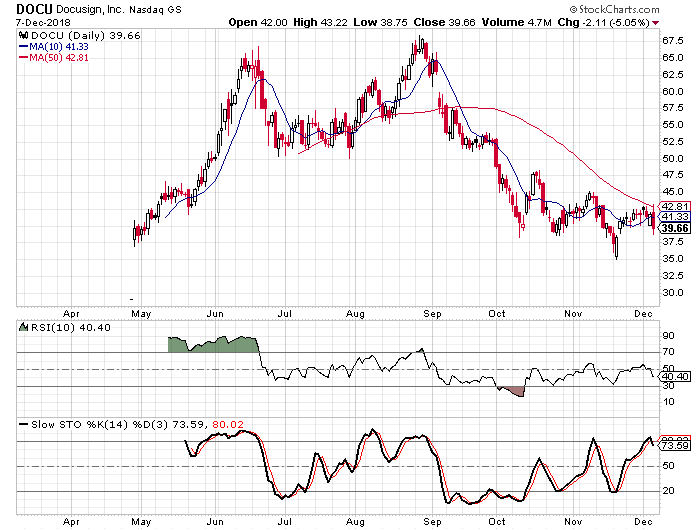 Docusign made its debut on the market in late April so we don’t have a long history here. What caught my eye was the stock hitting its 50-day moving average and turning lower after it hit the trendline. The stock was in overbought territory based on the daily stochastic readings and the indicators made a bearish crossover on Friday. We see that the last time this happened the stock fell from $45 to the $35 area.