Stocks were mixed on Thursday with the Nasdaq gaining ground and the other three indices falling slightly. The indices were down sharply in the morning session, but then rallied in the afternoon and erased most of the losses. The Nasdaq gained 0.42% as the lone winner among the four. The Dow suffered the worst loss at 0.32%. The Russell lost 0.22% and the S&P trimmed its loss to 0.15% by the end of the day.

[hana-code-insert name=’adsense-article’ /]The energy sector suffered the worst loss at 1.84% and it was followed by the financial sector with a loss of 1.39%.

The materials sector (-1.35%) joined those two to make it three sectors with losses over one percent.

My scans remained bearishly skewed on Thursday, but the discrepancy between the two lists dropped.

After four straight bearish trade ideas, I was looking for a bullish one, but there weren’t any great opportunities that I saw on the bullish list. There was only one that stood out on the bearish list and that was on Box, Inc. (NYSE: BOX). The company has poor fundamental ratings with an EPS rating of 39 and an SMR of an E. 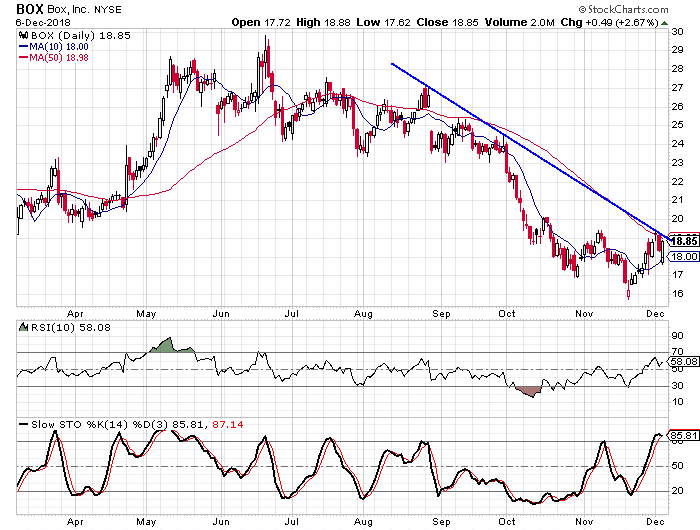 BOX had been climbing sharply for a couple of years, but it took a downturn in June and has been trending lower since. From the high in August and the high in September, a trendline has formed that is in close proximity to the 50-day moving average. The stock hit the moving average and the trendline earlier this week and then turned lower. I look for the downward trend to resume.