Stocks got crushed on Tuesday as concerns about the trade talks resurfaced. The consensus seemed to be that the news from the weekend wasn’t as good as initially thought. The Russell got hit the hardest among the U.S. indices and it lost 4.44%. The Nasdaq took a 3.8% hit and the S&P lost 3.24%. The Dow suffered the smallest loss, but it still dropped 3.1% as all 30 members lost ground.

Nine of the ten sectors dropped on Tuesday with the utilities sector being the lone one in the green with a gain of 0.07%.

The tech sector almost joined those two with a loss over 4%, but managed to come in just under that threshold with a loss of 3.79%.

My scans turned sharply more bearish on Tuesday with 151 bearish signals and not a single bullish signal.

This is the fourth time this year the barometer has dropped below -75.

Given the status of my scans and not having any bullish signals to choose from, you would be right to assume that today’s trade idea is a bearish one.  Plains All American Pipeline (NYSE: PAA) was one of the names on the bearish list and the chart caught my attention. The company’s fundamentals aren’t terrible, but they aren’t great either. The EPS rating is currently at 75, but the SMR rating is a C. 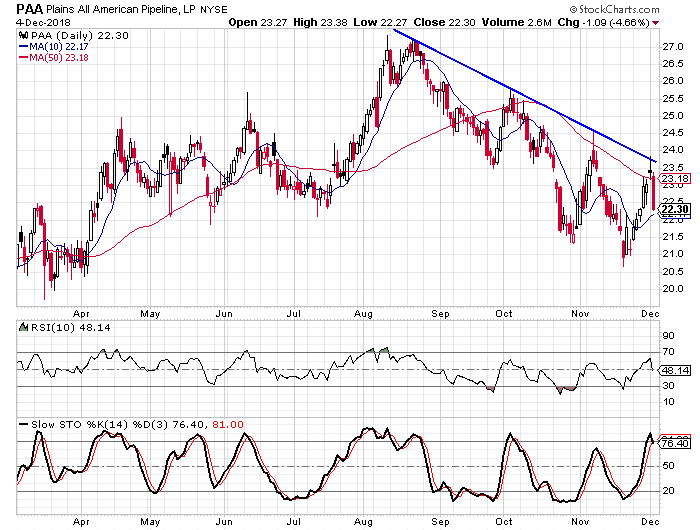 On the chart we see a trendline connecting the highs from the last four months and the stock just hit the trendline on Monday. In each of the three previous instances where the stock hit the trendline, the stock dropped at least 13%. I am looking for a similar drop, if not more, this time around.