Under normal circumstances I would be writing about what happened in yesterday’s market and offering you an option trade idea for consideration. With the market being closed today to honor former President George H.W. Bush, I felt like today would be a good time to address what I see happening in the current market. I will have a new option trade idea for you tomorrow and that will include a recap of Tuesday’s trading action.

The current market environment has me concerned. There are a number of issues plaguing the market—the trade war, rising interest rates, possible inversion in the yield curve, and the prospect of slower earnings’ growth in the first part of 2019.

[hana-code-insert name=’adsense-article’ /]The last few days of trading have helped clarify things for me a little.

When it was announced that the U.S. and China had agreed to a tariff ceasefire over the weekend, I got excited. I knew futures would soar on the news and when I checked Sunday night, I was right.

After strong gains Monday morning, stocks slid a little in the afternoon.

When trading opened on Tuesday, the indices were suffering small losses, but the losses accelerated around midday.

By lunchtime, all four of the main indices were down over 2%.

This is a major concern for me. When the market is in a bullish phase, investors shake off bad news and the indices keep climbing higher. When it is in a bearish phase, the market shakes off good news and continues moving lower. This week’s trading action sounds more like the reaction of a bear market.

I also wanted to share a weekly chart of the S&P 500. There is a trend channel on the chart of the index and I have been following the channel for almost two years now. You can see how the index was in a long-term trend with short-term cycles within the overall trend. 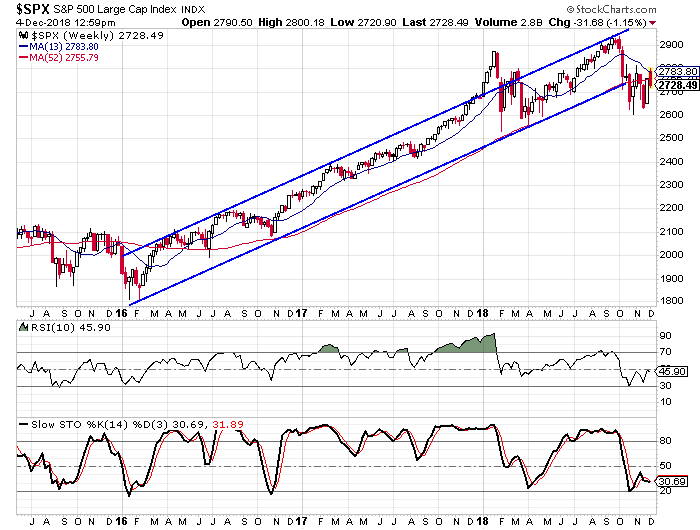 In the last month or so, we have seen the index break below the lower rail of the trend channel. That is one concern, but there are a couple of other items to take note of on the chart.

In 2015, the market was going through a consolidation phase and we saw the S&P caught between 1,900 and 2,100 for most of the year. There wasn’t any real directional trend, unless you consider sideways a direction.

It’s still possible that this phase of the market is just a consolidation like we saw in 2015, but I am worried that it could be the start of the next big move lower—the next trend where we see the indices drop 30% or more.

“The ‘American Dream’ means giving it your all, trying your hardest, accomplishing something. And then I’d add to that, giving something back. No definition of a successful life can do anything but include serving others.” President George H.W. Bush