Stocks gapped higher on Monday after the news of a cease-fire in the trade war came out over the weekend. All four of the main indices were up over 1.5% during the morning hours before settling back a little. The Nasdaq ended up leading the way with a gain of 1.51% and it was followed by the Dow with a gain of 1.13%. The S&P notched a gain of 1.09% and the Russell lagged slightly with a gain of 0.89%.

Nine of the ten sectors moved higher on the day with energy leading the way with a gain of 2.22%. The tech sector logged a gain of 2.19% as the second best performer and the consumer discretionary sector gained 1.86% for the third best performance.

[hana-code-insert name=’adsense-article’ /]The healthcare sector lost 0.48% on the day and was the only sector that lost ground.

Because of the big gains last week and the way most stocks closed off of their highs of the day, my scans were actually skewed to the bearish side last night.

The barometer dropped from 6.4 to -17.6 once the results from last night were added in to the equation.

Even though the market moved higher yesterday, my barometer is suggesting that we could see some selling in the days ahead. With that in mind, I am going with a name that was on the bearish list last night and that is Realogy Holdings (NYSE: RLGY). The company scores a 54 on the EPS rating and a D on the SMR rating. 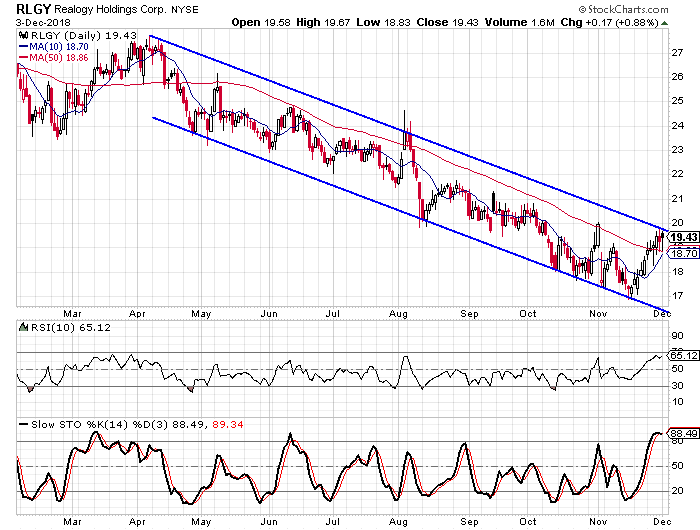 Over the last eight months Realogy has been declining and it has done so inside the confines of a downwardly sloped trend channel. The stock has hit the upper rail of the channel in the last few days, but it hasn’t been able to breakout. The daily stochastic readings are in overbought territory and they just made a bearish crossover yesterday.