Friday started a little shaky with all four of the main indices in negative territory in the early going. By the end of the day things had turned around and all four finished with gains. The performances of the main three were very similar with the S&P gaining 0.82% while the Dow and Nasdaq both gained 0.79%. The Russell lagged the others a little, but still notched a gain of 0.52%.

Eight of the ten sectors moved higher on the day with the healthcare sector leading the way with a gain of 2.03%. The utilities sector notched a gain of 1.48% and those were the only two that gained over one percent.

[hana-code-insert name=’adsense-article’ /]The energy sector lost 0.18% as the worst performing sector and it was joined in negative territory by the communication services sector with a loss of 0.16%.

There were 20 names on the bearish list and eight on the bullish side.

The barometer dropped from 34.6 to 6.4 as a result of the bearish skew.

There were a number of stocks on the bullish list with positive fundamentals, but I didn’t like the way any of the charts looked. 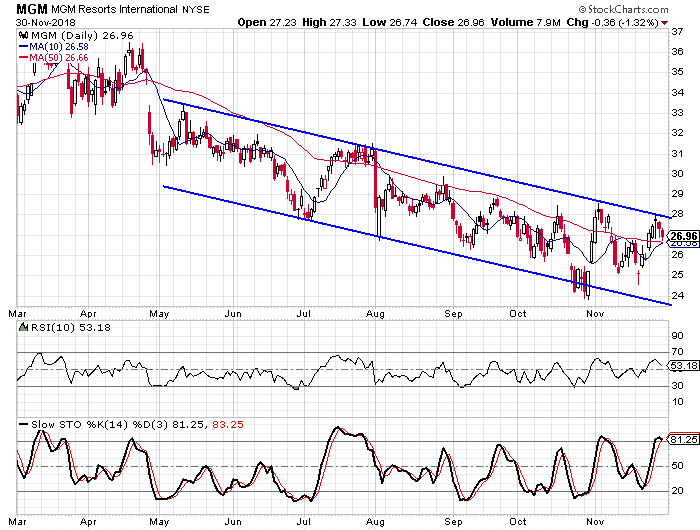 We see on the chart that the stock has been trending lower and a trend channel defines the different cycles over the last six months. The stock just hit the upper rail of the channel and we see that the stochastic readings just made a bearish crossover as well. I look for the stock to go through another bearish cycle within the overall down trend.

Buy to open the January $28-strike puts on MGM at $2.05 or better. These options expire on January 18. The stock will need to move just below the $24 level for these options to double in price. The lower rail of the channel is already below the $24 level and the recent lows in October were also below that level. I suggest a target gain of 100% with a stop at $28.20.