Thursday was a pretty uneventful day for stocks. All four of the indices ended up closing with small losses, but they did bounce back from much deeper ones early in the day. Wednesday’s rally was the biggest since March, so stocks may have needed a breather. Of course the meeting between President Trump and President Xi that is scheduled for this weekend is likely weighing on investors as well.

[hana-code-insert name=’adsense-article’ /]Despite the indices all closing lower, the sectors were mixed in their results with the majority gaining ground.

The materials sector led the way with a gain of 0.68% and it was followed by the energy sector which logged a gain of 0.67%.

On the down side, the worst performer was the tech sector with a loss of 0.97%.

The financial sector was the second worst performer with a decline of 0.89%.

After five straight nights with a bullish skew, the scans shifted to a slight bearish one last night. There were 13 names on the bullish list and 15 names on the bearish list. The barometer dropped to 34.6 from 66.8 once these results were added to the indicator.

After four straight bullish trade ideas and with the importance of the G20 summit happening this weekend, I felt it was important to look harder at bearish opportunities. One name on the bearish list that stood out was the iShares MSCI Hong Kong ETF (NYSE: EWH). If there isn’t any headway made between the U.S. and China at the summit, I look for Chinese and Hong Kong stocks to fall sharply come next week. 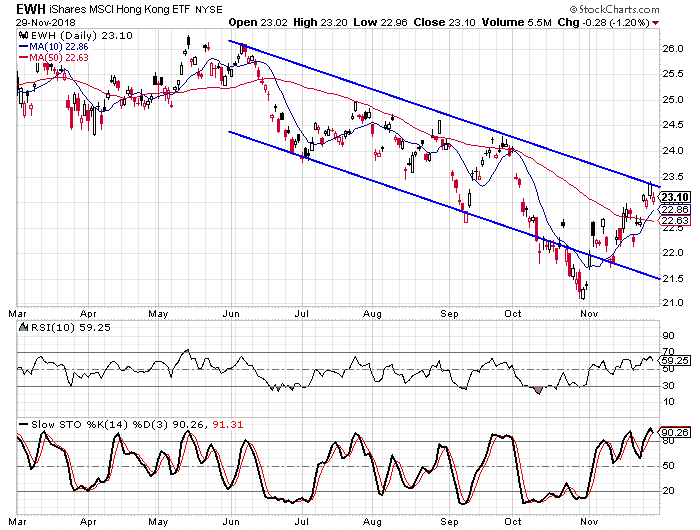 The EWH has already been trending lower over the past six months and a trend channel has formed around the different cycles. The fund just hit the upper rail of the channel and we see that the stochastic readings made a bearish crossover.

Buy to open the January $24-strike puts on EWH at $1.50 or better. These options expire on January 18. These options will double if the price reaches $21. That is the approximate low that was reached in late October, but it is below the lower rail of the channel at this time. Even with that in mind, I suggest a target gain of 100% with a stop at $23.60.