Stocks soared on Wednesday after good news on two fronts. Fed Chairman Powell took a much different tone about where we stand with interest rates and White House economic adviser Larry Kudlow hinted that a truce in the trade war could be in the works.

[hana-code-insert name=’adsense-article’ /]Nine of the 10 main sectors moved higher on the day with the utilities sector being the lone one to close in the red with a loss of only 0.05%.

The consumer staples sector gained 0.83% as the second worst performer and the only other sector that failed to gain at least one percent.

The tech sector led the way on Wednesday with a gain of 3.5%.

The consumer discretionary sector finished with the second best gain at 2.95%.

There were three other sectors that gained over two percent.

My scans produced more bullish signals than bearish ones for a fifth straight night. The results from Wednesday showed 49 names on the bullish side and only one on the bearish side.

The barometer dipped slightly again last night, down to 66.8 from 75.2.

Based on the size of the two lists, obviously today’s trade idea is a bullish one. The one chart that stood out to me the most was Rio Tinto (NYSE: RIO). The company gets mixed scores on the fundamental ratings with an EPS rating of 48 and an SMR rating of an A. But like I said before, it was the chart that really caught my eye. 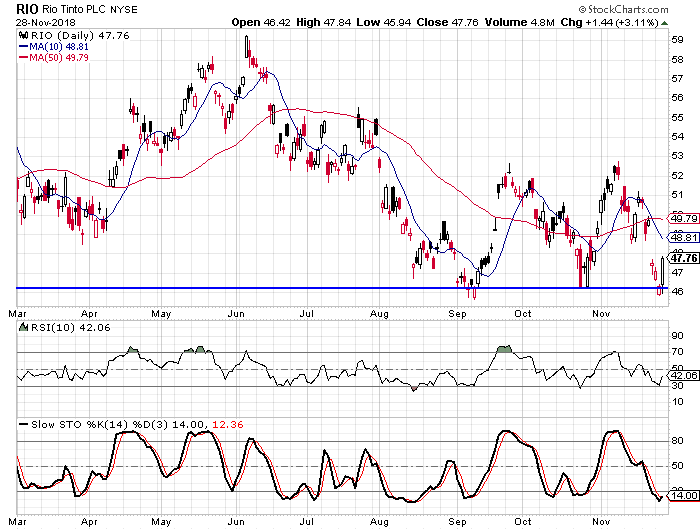 What we see on the daily chart is that the stock has dipped down to the $46 area on several occasions in the last few months. Each time it dipped, it closed right around the $46.25 area. It did this on three separate occasions and then rallied. I am betting on another rally this time for the metals and mining company.