Tuesday brought us a mix of results from the four main indicators with two experiencing significant gains, one barely changed, and one suffered a significant loss. The Dow led the way with a gain of 0.44% while the S&P gained 0.33%. The Nasdaq was up 0.85 points which amounts to a gain of 0.01%. The Russell dropped 0.87% on the day.

Seven of the 10 main sectors moved higher Tuesday with the healthcare sector leading the way with a gain of 1.04%. The other two defensive sectors, consumer staples (0.89%) and utilities (0.79%) were the second and third best performers.

[hana-code-insert name=’adsense-article’ /]Of the three sectors that lost ground, the materials sector suffered the worst loss at 1.22%.

My scans remained bullishly skewed last night, but the differential between the two lists dropped significantly.

There were 25 names on the bullish list and three on the bearish side.

The barometer did drop slightly after last night’s results were added in to the equation.

Today’s trade idea is a bullish one and it is on a stock I have recommended on two previous occasions. The stock is Abbott Laboratories (NYSE: ABT) and the company has good fundamental ratings. The EPS rating from Investor’s Business Daily is a 76 and the SMR rating is an A. 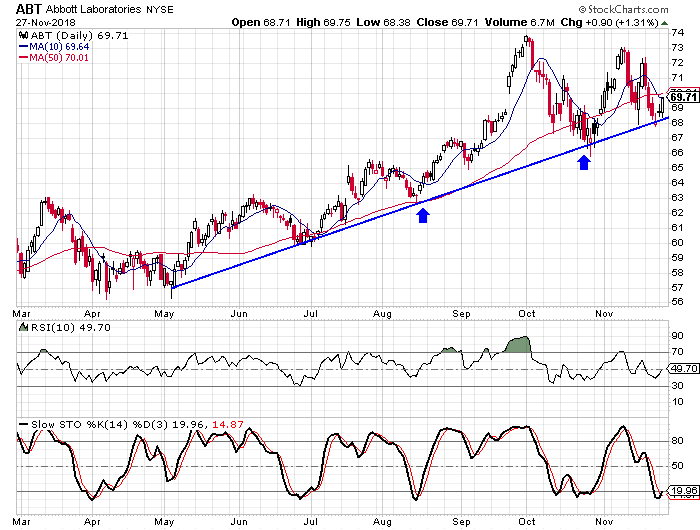 The chart shows how the stock has been trending higher and how it has just bounced off of the trendline connecting the lows from the last seven months. The two blue arrows show the two previous instances where I recommended calls and both of those trades were successful.