After a disappointing Thanksgiving week, stocks bounced back with a strong performance on Monday. All four of the main indices logged significant gains with the Nasdaq leading the way with a gain of 2.06%. The S&P was the second best performer (+1.55%) and it was followed by the Dow (+1.46%). The Russell was the laggard on the day, but still notched a gain of 1.22%.

All of the main sectors moved higher on Monday with four of them gaining more than two percent. The top three sectors were really close in their performances, but in the end it was the consumer discretionary sector that led the way with a gain of 2.26%.

The financial sector gained 2.08% and was the fourth one with a gain over two percent.

The three defensive sectors that led the way on Friday were among the worst performers on Monday.

Consumer staples only notched a gain of 0.07% and that was the worst performance.

Utilities gained 0.59% as the second worst performer while healthcare logged a gain of 0.99%.

The industrial sector gained 0.79% and it was the only other sector to gain less than one percent.

My scans were unbelievably skewed to the bullish side on Monday with 170 signals. There were only four signals on the bearish side.

The huge discrepancy caused the barometer to jump from 27.2 to 88.6. That is the highest reading since October 29 when it registered a reading of 90.1. That reading came just before the 170 point jump in the S&P over seven trading days.

Given the huge bullish reading on the barometer, I felt a bullish trade idea on the overall market was the best course of action. The SPDR S&P 500 ETF (NYSE: SPY) has served us well in previous instances where the barometer gave us big positive or negative readings. 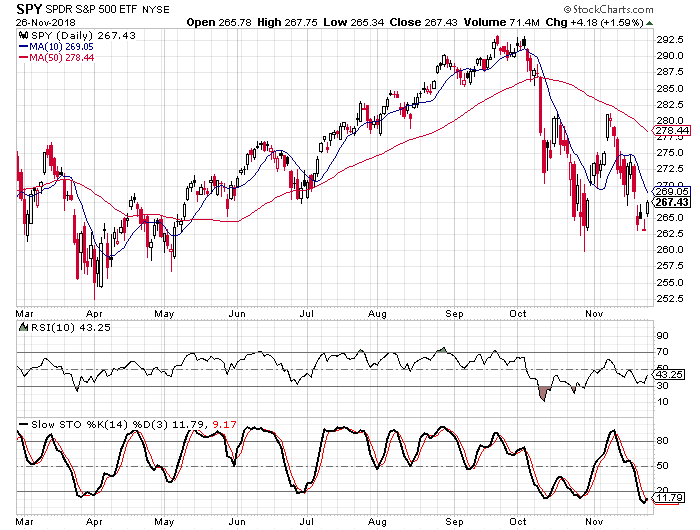 You can see on the daily chart that the SPY had become quite oversold based on the stochastic readings. The SPY was among the 170 names on the bullish list last night and one of the reasons was the bullish crossover in the daily stochastics. It also caught my eye that the closing low on Friday and the low in late October were similar. We could be looking at a double-bottom pattern.