Stocks got hammered again on Tuesday and all four indices suffered significant losses. The worst performance came from the Dow with a loss of 2.21% and it was followed by the S&P with a loss of 1.82%. The Nasdaq lost 1.7% and the Russell was actually the best performer with a loss of 1.66%.

All ten main sectors lost ground yesterday and once again it was the utilities sector that led the way, but in yesterday’s action it had a loss of 0.47%. The only other sector that managed to keep its loss under one percent was the healthcare sector (-0.99%).

[hana-code-insert name=’adsense-article’ /]The energy sector suffered the worst loss on Tuesday and it was 3.25%.

The consumer discretionary sector lost 2.27% as the second worst performer.

In all, there were five sectors that lost over two percent.

My scans remained bearishly skewed yesterday and even moved to a more bearish slant.

There were 41 names on the bearish list and nine on the bullish side.

The barometer dropped from 24.6 to 0.3 once these results were added.

Given the greater number of signals, it shouldn’t be a surprise that today’s trade idea is another bearish one. Bank of New York Mellon (NYSE: BK) appeared on the bearish list and its fundamental ratings aren’t terrible, but the chart outweighs the fundamentals in this case. The EPS rating is above average at 68 and the SMR rating is a B. 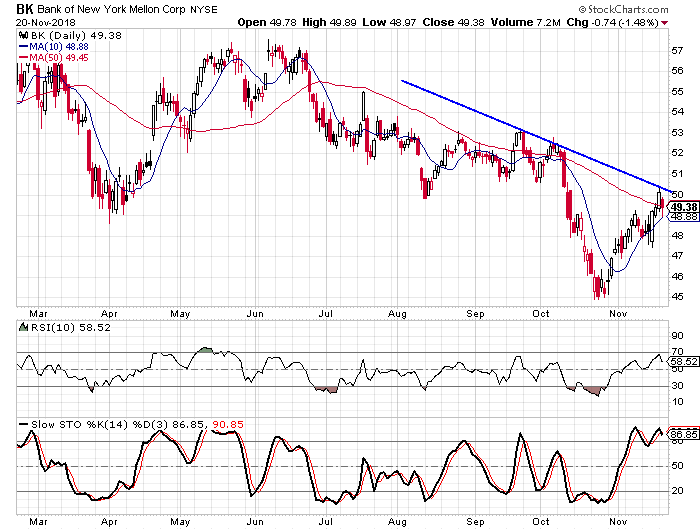