We saw another big reversal on Thursday, only this time it was an afternoon rally instead of an afternoon selloff. All four of the main indices were lower in the morning and all four finished with significant gains. The Nasdaq led the way with a gain of 1.72% and it was followed by the Russell with a gain of 1.32%. The S&P notched a gain of 106% and the Dow registered the smallest gain at 0.83%.

Even though it was pretty broad rally, only seven of the 10 sectors posted gains. The tech sector led the way with a gain of 2.51%. There were four other sectors that posted gains over one percent.

Utilities and staples kind of make sense since it was a risk-on day, but discretionary being in the red was a little odd.

That is the first positive reading since November 2.

The bullish list was quite impressive last night with a number of stocks that had EPS ratings over 80 and A SMR ratings. The one in particular that caught my eye was Apple (Nasdaq: AAPL). The company has an EPS rating of 90 and an A SMR rating. 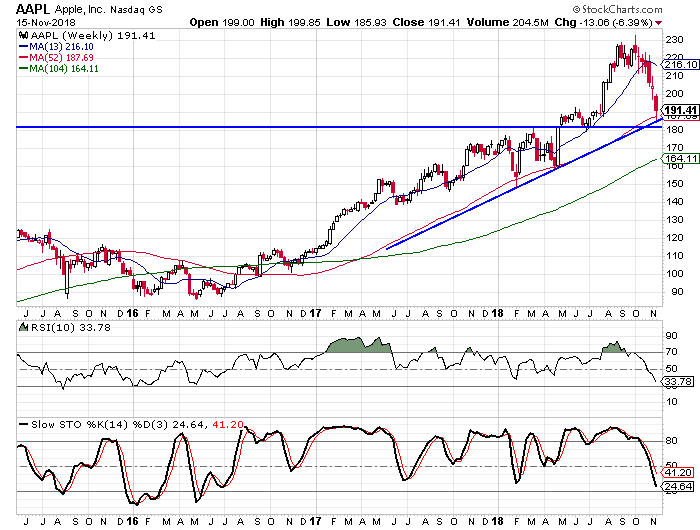 Apple has gotten a lot of press over the last few weeks and has been blamed in part for the fall in the overall market and other stocks affiliated with the company as suppliers and such. What jumped out to me was the weekly chart and how the stock touched a trendline that connects the lows from earlier this year. That trendline is just below the 52-week moving average and just above the $180 level which served as a temporary high in March.