Stocks attempted a rally on Tuesday after the big selloff on Monday, but the momentum was lost in the afternoon. The Nasdaq finished unchanged and that was the best performance of the day. The Dow was the worst performing sector with a loss of 0.40%. The Russell lost 0.26% and the S&P lost 0.15%.

Six of the 10 of the main sectors lost ground yesterday with the energy sector suffering the worst loss at -2.27%. Oil fell for a record seventh straight day and it dropped 7.76% on the day. The second worst loss came from the healthcare sector at 0.67%.

[hana-code-insert name=’adsense-article’ /]On the plus side, the financial sector led the way with a gain of 0.56%.

It was closely followed by the industrial sector which notched a gain of 0.45% and the utilities sector with a gain of 0.42%.

After the big bearish reading from the scans on Monday, last night’s results were far less skewed.

There were 22 names on the bearish list and five on the bullish side.

Even though the scans were still bearish, the barometer rose from -107 to -81.3 after yesterday’s results were added to the equation.

Even with the slight jump, last the reading is the third lowest reading of this year.

None of the stocks on the bullish or bearish lists from last night really got my attention. So I went to a list of stocks with strong fundamentals that I have been monitoring. The trade idea for today is a bullish one on Union Pacific (NYSE: UNP). The company scores an 83 on IBD’s EPS rating system and it gets an A in the SMR ratings. 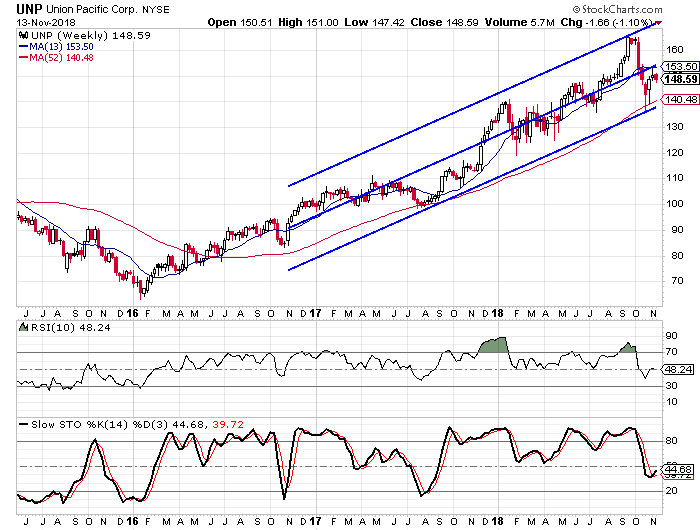 The weekly chart for UNP shows how the stock has been trending higher over the last few years. I drew a regression channel for the last two years and as you can see the stock has just recently ventured farther below the regression line than at any point. The stochastic readings didn’t reach oversold territory, but they did just make a bullish crossover.