Stocks got crushed on Monday and three of the four indices lost over two percent. The S&P lost 1.97% and it was the best performer of the bunch. The Nasdaq lost 2.78% as the worst performer. The Dow registered a loss of 2.32% and the Russell lost 2.02% to round out the results.

All 10 of the main sectors lost ground on the day, but it was the tech sector that got hit the hardest with a loss of 3.48%. The energy sector (-2.12%) and the consumer discretionary sector (-2.03%) were the only other sectors to lose over two percent.

[hana-code-insert name=’adsense-article’ /]The utilities sector only lost 0.07% and that was by far the best performance of the day.

Consumer staples lost 0.53% and those were the only two that lost less than one percent.

My scans were extremely bearish again last night with 156 names on the bearish list and only two bullish signals.

Because of the low reading from my barometer, today’s trade idea is a bearish one on the SPDR S&P 500 ETF (NYSE: SPY). I suggested puts on the SPY on February 5 and on April 23 after the extreme readings in the barometer. The SPY was also one of the 156 names on the bearish scan last night. 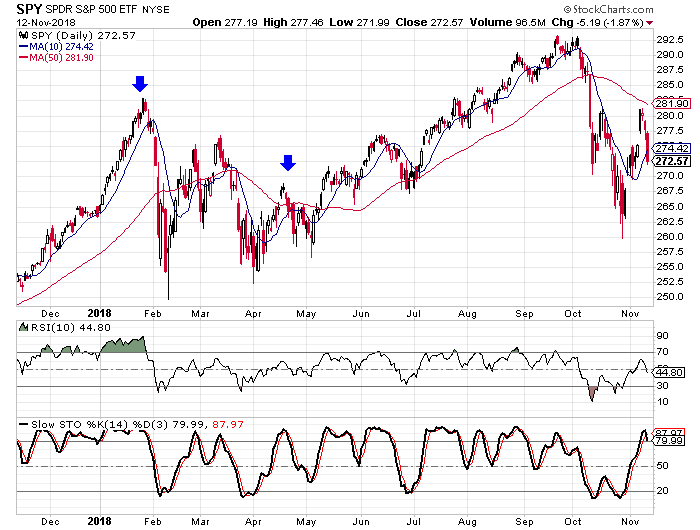 The two blue arrows represent the two low readings from the barometer. If this extreme bearish reading from the barometer and the bearish signal from the scans works out like the last ones, we should see another sizable drop in the market.

Buy to open the December $277-strike puts on SPY at $8.75 or better. These options expire on December 21. The intrinsic value of these options will reach $17.50 (double the suggested purchase price) if the SPY reaches $259.50. That is slightly below the low from October 29. Hopefully there will still be some time premium left in the options. I suggest a target gain of 100% with a stop at $280.