Stocks fell on Friday to take away from the big weekly gain that we had going through Thursday. All four of the main indices dropped with the Russell suffering the worst loss at 1.82%. The Nasdaq was the second worst performer with a loss of 1.65% and it was followed by the S&P with a loss of 0.92%. The Dow was the best performing index despite a loss of 0.77%.

All told there were five sectors that lost over one percent.

My scans registered an even greater bearish reading on Friday night with 126 names on the bearish side of the equation and only five names on the bullish list.

The barometer dropped to a reading of -64 and that is the lowest reading since May 15.

The trade idea for today is a bearish one once again and it is on Franklin Resources (NYSE: BEN).

The company appeared on the bearish list Friday night and the fundamental ratings are mixed with an average EPS rating of 53 and an SMR rating of a B which is slightly above average. 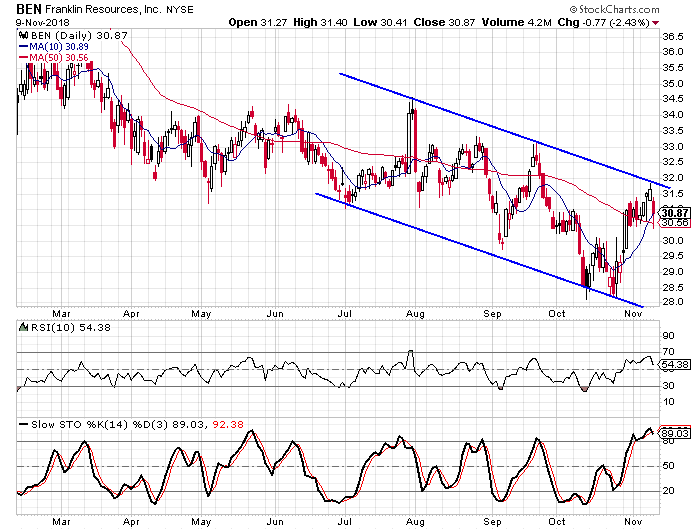 The chart shows how the stock has been trending lower with a very clearly defined trend channel connecting the highs and the lows from the last three and a half months. The oscillators were in similar positions to where they were at the high in mid-September before the stock fell approximately 15%. A similar drop from the recent high would take the stock down near the $27 area.

Buy to open the January 2019 $32.50-strike puts on BEN at $2.50 or better. These options expire on January 18. These options will double if the stock reaches $27.50 and as I mentioned above that would be a similar decline to what we saw from the September high to the October low. I suggest a target gain of 100% with a stop at $32.