After the big rally on Wednesday, stocks struggled a little on Thursday. Three of the four main indices dropped with the Dow logging a small gain of 0.04%. The Nasdaq suffered the worst loss at 0.53% and the Russell was the second worst performer with a loss of 0.39%. The S&P registered a loss of 0.25%.

Six of the 10 main sectors fell yesterday with the worst loss coming from the energy sector at 2.21%. Oil fell for a ninth straight session adding to the sectors wows.

[hana-code-insert name=’adsense-article’ /] The second worst performance came from the communication services sector with a loss of 0.94%.

The top performing sector was the financial sector with a gain of 0.37%.

The other three that moved higher all had gains of less than 0.10%.

My scans turned more bearish last night with 45 signals on that side and only four on the bullish list.

The subject of today’s trade idea is a familiar one for anyone that follows this daily column. The iShares MSCI Emerging Markets ETF (NYSE: EEM) has once again appeared on the bearish list and I am looking for the pattern we have played successfully three previous times to work for us once again. 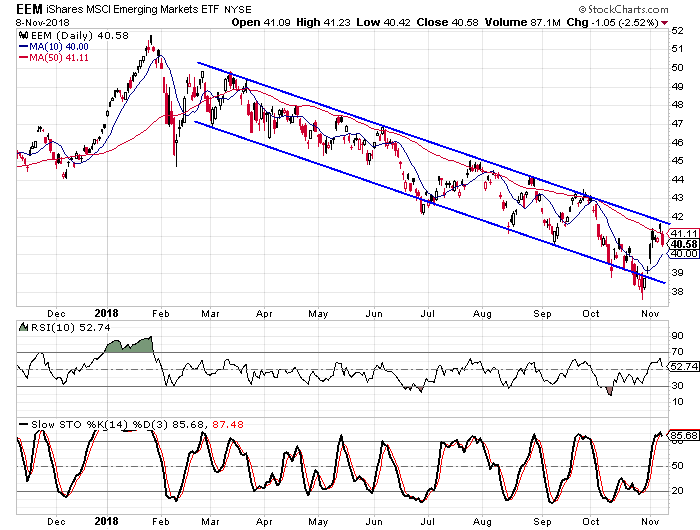 We see the same channel that we used to play puts on the EEM in late July, late August, and late September is once again coming in to play. The fund hit the upper rail of the channel on Wednesday and then turned lower yesterday. The stochastic readings made a bearish crossover like we saw on those occasions as well.

Buy to open the December $41-strike puts on EEM at $1.85 or better. These options expire on December 21. These options will double if the fund drops to $37.30. That is slightly below the recent low and the lower rail should be in that area within the next week. I suggest a target gain of 100% with a stop at $41.75.