Stocks screamed higher on Wednesday after the results of the midterm elections were known. I am not sure that the outcome mattered as much as the fact that there was certainty about how the Senate and House would be comprised for the next two years.

[hana-code-insert name=’adsense-article’ /]All 10 of the main sectors moved higher for the second straight day.

The healthcare sector led the way with a gain of 2.94%.

The only sector that didn’t gain at least one percent was the consumer staples sector which gained 0.53%.

My scans produced more bearish signals than bullish ones for a fourth straight night, but the differential between the lists dropped considerably.

There were 17 names on the bearish side and 13 on the bullish side.

The barometer rose slightly due to the smaller gap between the two sides. The reading for last night was -16.5 after being at -21.5 on Tuesday night.

After four straight bearish trade ideas, I have a bullish one for you today. Marathon Oil (NYSE: MRO) appeared on the bullish list and the company’s fundamental ratings are mixed. The EPS rating is solid at 76, but the SMR rating is only average with a C. 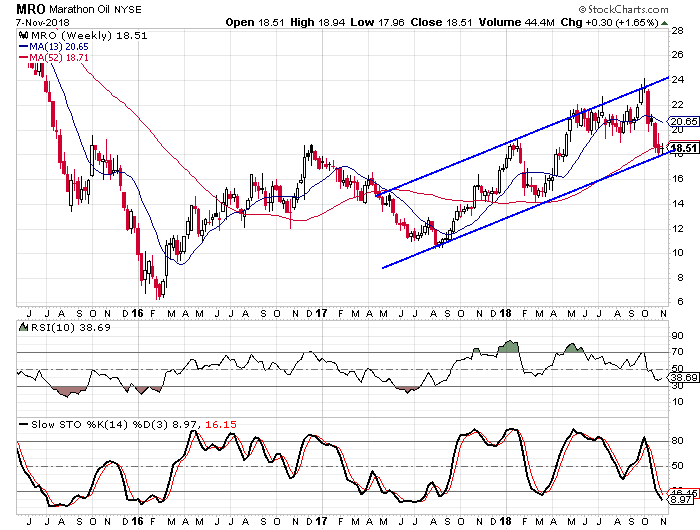 The daily chart showed that the stochastic readings made a bullish crossover, but it was the weekly chart that caught my attention more so than the daily one. The stock has been moving higher within a trend channel over the last few years and the stock just hit the lower rail. The weekly stochastic readings just hit oversold territory and the last time they did this, they didn’t stay there long as the stock rallied sharply over the next two months.

Buy to open the January 2019 $17-strike calls on MRO at $2.50 or better. These options expire on January 18. For these options to double, the stock will need to reach $22. That might seem like a lot to ask of the stock, but in March when the weekly stochastic readings hit oversold territory, the stock rallied over 40% in the next few months. A 40% move from the $18 area would put the stock above $25 and these options would be worth over $8.00. I suggest a target gain of at least 100% with a stop at $17.50.