Monday saw an even split between the indices with two moving higher and two moving lower. The Dow led the way with a gain of 0.76% and it was joined in positive territory by the S&P with a gain of 0.56%. The Russell lost 0.1% and the Nasdaq suffered the worst loss at 0.38%.

[hana-code-insert name=’adsense-article’ /]The communication services sector was the worst performer with a loss of 0.35%.

The other sector that lost ground was the tech sector which registered a loss of 0.07%.

My scans registered another bearish day with 28 names on that side of the docket and only four on the bullish side.

The barometer dipped in to negative territory with a reading of -11.9.

That is the first negative reading in nine trading days and only the second one since September 27.

Today’s trade idea is another bearish one, making it three in a row on the bearish side.  American Airlines Group (Nasdaq: AAL) appeared on the bearish scan last night and the fundamental rankings are mixed with an EPS rating of only 22, but the SMR rating is above average with a B. 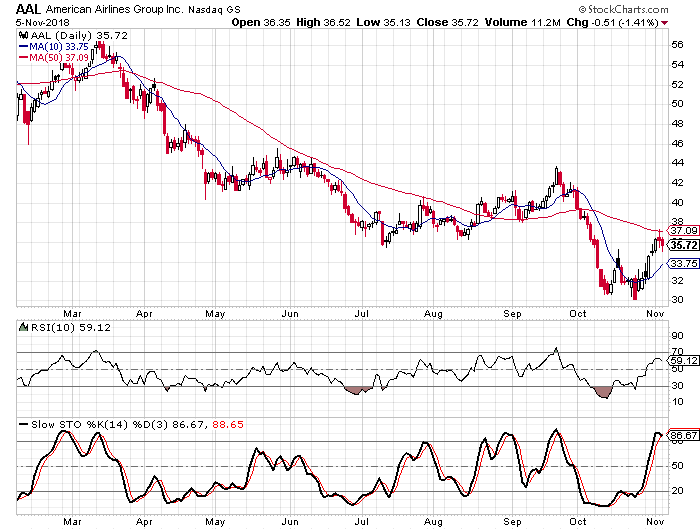 The chart shows that American has rallied up to its 50-day moving average since dropping down near the $30 level in late October. If you look at the pattern back in March and April, the stock rallied above the 50-day and then fell. It rallied back up to the moving average in early April and then fell sharply. I am looking for that pattern to repeat.

Buy to open the December $37-strike puts on AAL at $2.80 or better. These options expire on December 21. These options will double if the stock drops down to the $31.40 level. That is well above the recent low. I suggest a target gain of 100% and would recommend shutting the trade down if the stock closes above the 50-day.