After three straight days of big gains, stocks slipped on Friday. The three main indices moved lower on the day, but the small-cap Russell did manage a gain of 0.19%. The Nasdaq suffered the worst loss at 1.04% and it was hurt by the disappointing earnings results from Apple. The S&P lost 0.63% and the Dow lost 0.43%.

In a complete reversal from Thursday, nine of the 10 main sectors moved lower on Friday. The lone gainer was the consumer discretionary sector which gained 0.41%.

[hana-code-insert name=’adsense-article’ /]The worst performing sector was the tech sector which lost 1.95% and that was once again the result of Apple dropping 6.6% on the day.

The only other sector to lose more than one percent was the communication services sector which lost 1.01%.

My scans snapped an 8-day stretch of bullishly skewed results on Friday.

There were 28 names on the bearish list and only two on the bullish side.

The barometer did remain in positive territory with a reading of 4.7, but that was down from a reading of 39.3 on Thursday.

Given the choices available from my scans, today’s trade idea is a bearish one on Toll Brothers (NYSE: TOL). Toll is a homebuilder and its fundamental ratings are actually pretty good with an EPS rating of 84 and an SMR rating of a B. However, new home sales have been declining in recent months and the annual rate of homes being built dropped in September to its lowest level since December 2016. 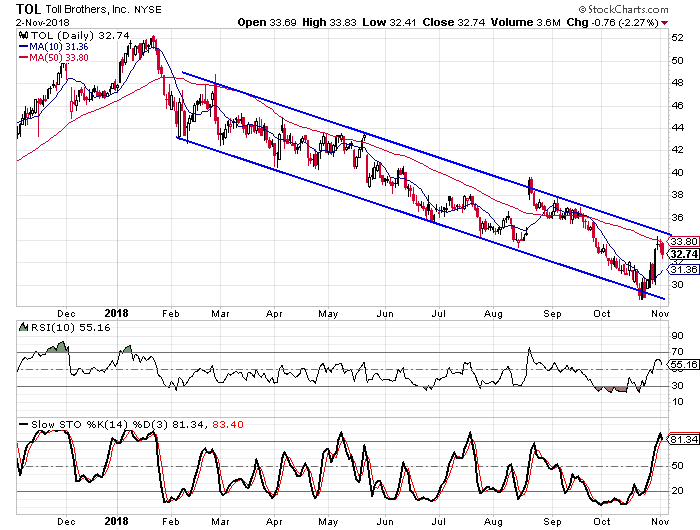 You can see on the chart how the stock has been declining over the last nine months and a downwardly-sloped trend channel has formed. The upper rail of the channel is just above the 50-day moving average and that has been the case since mid-February. This means the stock has two layers of resistance it is going to have to break through if it is going to break the trend lower.

Buy to open the December $34-strike puts on TOL at $2.70 or better. These options expire on December 21. These options will double if the stock drops to $28.60 and that is approximately where the lower rail of the channel is right now. I suggest a target gain of 100% with a stop at $34.25.