The stretch of upward moves reached three straight days on Thursday as all four indices moved higher yet again. The Russell led the way yesterday with a gain of 2.22% and it was followed by the Nasdaq with a gain of 1.75%. The Dow and S&P had matching gains of 1.06%.

Nine of the 10 main sectors moved higher on the day with the utilities sector (-0.45%) being the lone one in the red.

[hana-code-insert name=’adsense-article’ /]Materials led the way with a gain of 2.81% and consumer discretionary gained 2.04%.

The spread between the bullish list and the bearish list continued to shrink when I ran my scans last night.

There were 16 names on the bullish side and seven on the bearish side.

The barometer dropped from 63.1 to 39.3 once yesterday’s results were added.

Of the seven names on the bearish list, five of them were tied to the retail sector.

I didn’t like the total setup for any of those stocks—the chart, the fundamentals, and the option pricing. So today’s trade idea is derived from the fact that there are five bearish signals from the retail sector. If you haven’t figured it out yet, it is a bearish trade idea and it is one the SPDR S&P Retail ETF (NYSE: XRT). 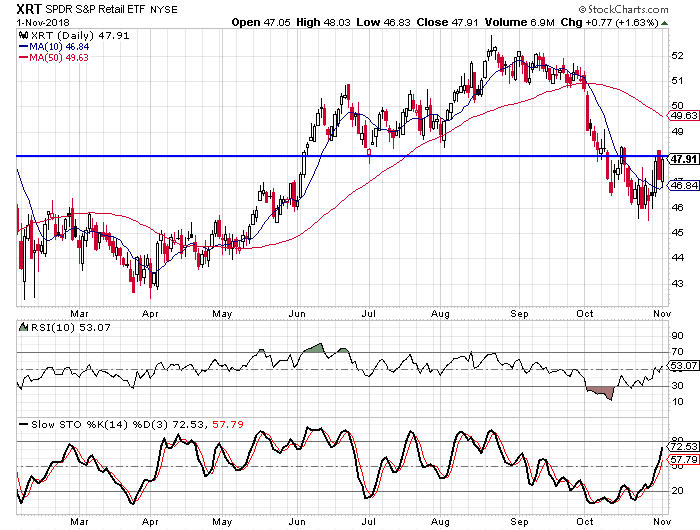 Looking at the chart you can see that the ETF found support in the $48 area back in July and then fell below that level in mid-October. It then had trouble moving back above the $48 level and has yet to close back above it. The oscillators aren’t up to overbought territory yet, but with all the retail names on the bearish list, it might not get to that point.