Stocks rallied sharply for a second straight day and all four indices gained ground again on Wednesday. The Nasdaq led the way once again and this time it was a 2.01% gain. The S&P had the second best performance with a gain of 1.09% and it was followed by the Dow which notched a gain of 0.97%. The Russell lagged the other three significantly, but still logged a gain of 0.39%.

Eight of the 10 main sectors logged gains yesterday and the tech sector led the way with a gain of 2.36%. The communication services sector gained 2.15% and it was the only other sector to gain over two percent.

[hana-code-insert name=’adsense-article’ /]The two sectors that lost ground were the defensive ones.

My scans remained bullishly skewed on Wednesday, but the differential dropped considerably.

There were 43 names on the bullish list and six on the bearish side.

The differential of 37 is the smallest in the past week.

The barometer dropped from 80.7 to 63.1 once these results were added to the equation.

Today’s trade idea is another bullish one and it is on American Express (NYSE: AXP). The company reported earnings on October 18 and it beat on both the top and bottom lines. The company has an EPS rating of a 76 and the SMR rating is an A. 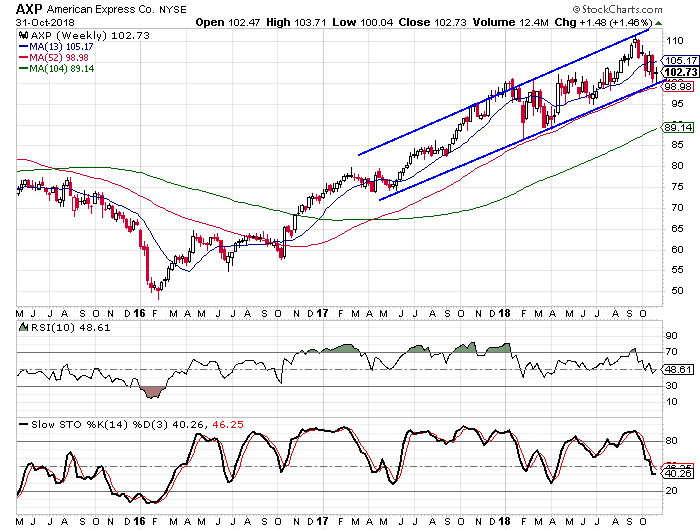 Amex has been trending higher within a trend channel over the last year and a half and it just hit the lower rail of the channel. The lower rail is in close proximity to the 52-week moving average and the stock has been above that trendline for two years now. I look for the stock to bounce from here and remain above the 52-week.