Monday started off well with stocks moving higher, piggybacking off of gains in Europe, but things turned south in the afternoon. All four main indices finished lower on the day with the Nasdaq getting hit the hardest with a loss of 1.63%. The Dow lost 0.99% and the S&P dropped 0.66%. The Russell dropped the least, but still lost 0.44%.

[hana-code-insert name=’adsense-article’ /]The energy sector was the worst performer with a loss of 1.87%.

The tech sector (-1.69%) and the industrial sector (-1.65%) finished as the second and third worst performers.

The communication services sector lost 1.55%, making four sectors that lost over one percent.

My scans continued the string of bullishly skewed results, making it five days in a row.

The lopsided results grew Monday with 152 names on the bullish list and six on the bearish side.

The barometer jumped from 55.2 to 90.1 once Monday’s results were added in to the equation.

After suggesting four straight bullish trade ideas and watching the market continue to drop, I couldn’t make it five straight—even though the barometer is as high as it is. I looked back at my barometer results for the summer of 2015 to get an idea of how it reacted during that stretch.

July and August of ’15 were a similar period and it was the last time the S&P closed below its 52-week moving average. That was also a period where the barometer kept getting strong positive readings, but the S&P didn’t bounce until the end of September. It then corrected again in December of that year.

Because of what I found, and because I don’t want to make another bullish trade idea in this market, today’s trade is a bearish one. There weren’t any stocks on the bearish list that I liked the look of, so I am going away from my scan results for today. The Invesco QQQ Trust (Nasdaq: QQQ) has dropped below its 52-week moving average and the market looks like it could head lower. 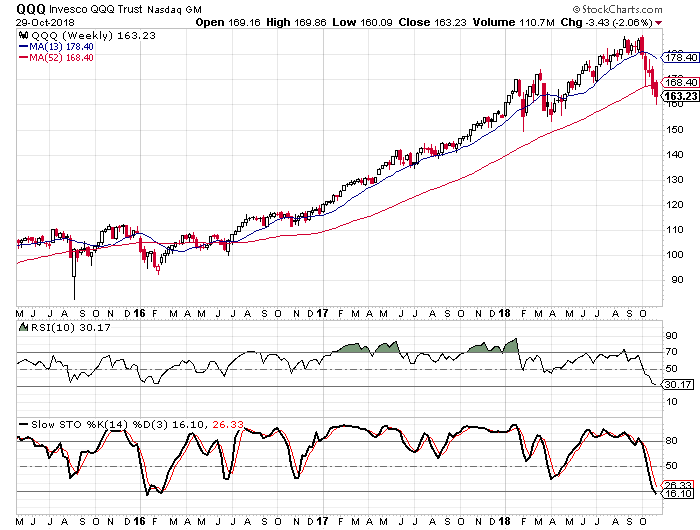 The ETF is just approaching oversold territory based on the 10-week RSI and the weekly stochastic readings. In 2015 when the QQQ dropped below its 52-week it dropped another 17% to its low. I am concerned that the market could do that again with earnings reports from Facebook and Apple coming up later this week.

Buy to open the December $165-strike puts on QQQ at $7.50 or better. These options expire on December 21. These options will double if the price drops to $150, but given the way the market is acting, that isn’t out of the question. I suggest a target gain of 100% with a stop of $170.