After big gains for all four indices on Thursday, we saw another round of selling on Friday. All four of the main indices lost ground and all lost over one percent. The Nasdaq got hit the hardest with a loss of 2.06%. The S&P lost 1.73% and the Dow lost 1.19%. The Russell had the smallest loss at 1.1%.

All ten main sectors registered losses on Friday with varied degrees of losses. The consumer discretionary sector lost 3.11% and that was the worst performance of the bunch. The communication services sector took the second biggest loss at 2.71% and the tech sector lost 2.0% as the third worst.

[hana-code-insert name=’adsense-article’ /]There were only three sectors that didn’t suffer a loss of at least one percent.

The materials sector was the best performer with a loss of only 0.59%.

My scans remained bullishly skewed for a fourth straight night.

I didn’t really like the combination of fundamentals and charts of any of the stocks on either list Friday night, so I looked at a different list. Each week I run a scan with weekly indicators like the one I run daily and there was a stock on the weekly bullish scan that caught my eye. PulteGroup (NYSE: PHM) bucked the trend last week and actually gained ground. The company scores a 96 on IBD’s EPS rating system and an A in the SMR ratings. 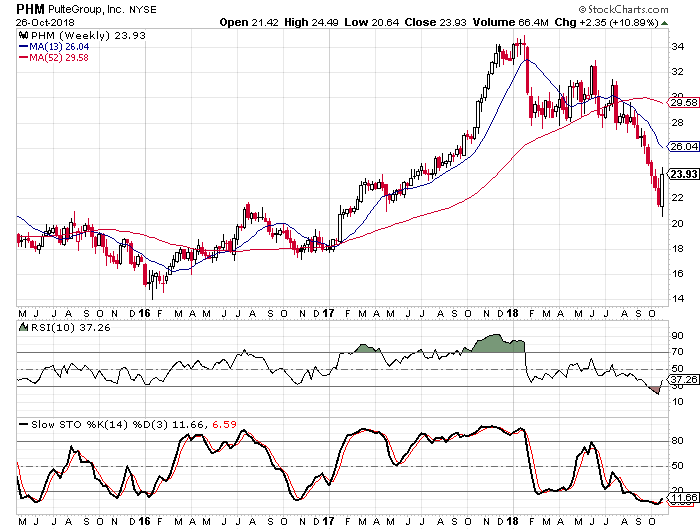 You can see on the weekly chart that the stock gained 10.89% last week while the indices were all considerably lower. Pulte’s gain was fueled by its earnings report on Tuesday. What specifically caught my attention was the bullish engulfing pattern it had this week and the bullish crossover in the weekly stochastic readings.

Buy to open the December $22-strike calls on PHM at $2.80 or better. These options expire on December 21. The stock will need to get to $27.60 for these options to double and that is 15% from where the stock closed on Friday. Given the big jump last week, I think a 15% jump over the next seven weeks is a reasonable goal. I suggest a target gain of 100% with a stop at $22.00.