Stocks responded to Wednesday’s selloff with a big rally across the board. All four indices gained at least 1.5% with the Nasdaq leading the way with a gain of 2.95%. The Russell had the second best gain at 2.16% followed by the S&P which notched a gain of 1.86%. The Dow lagged the other indices, but still managed a gain of 1.63%.

Nine of the ten main sectors moved higher yesterday and they were led by the tech sector with a gain of 3.32%. The communications services sector (+3.20%) also logged a gain over three percent.

[hana-code-insert name=’adsense-article’ /]The consumer discretionary sector was close to making it three with a gain of 2.99%.

The utilities sector was the lone sector to lose ground with a loss of 1.56%.

My scans had another big bullish day with 98 names on that side of the docket compared to only 11 on the bearish list.

The barometer rose to 57.8 from 31.3 thanks to the second straight bullishly skewed day.

I have another bullish trade idea for you today and the subject is Paychex (Nasdaq: PAYX).

The company appeared on the daily bullish list, but it was the weekly chart that caught my attention. The company scores a 77 on IBD’s EPS rating system and it gets an A in the SMR category. 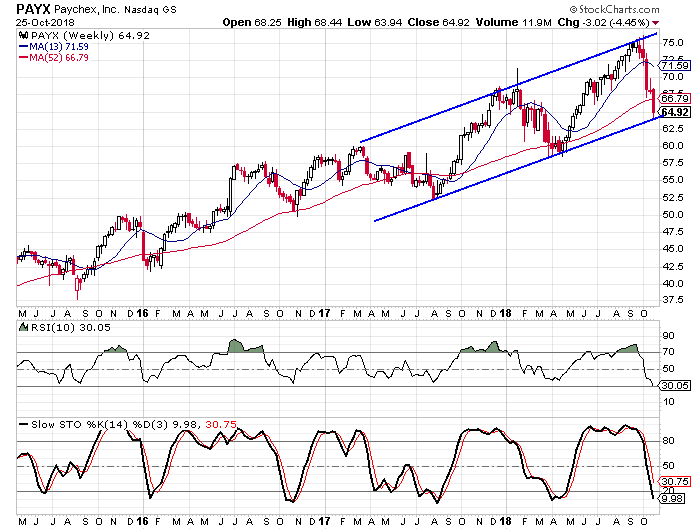 Paychex reported earnings back on October 2 and has slipped since, even though the company beat its EPS estimates. I think it has been driven down due to market conditions more so than its own merits. The stock has formed an upward-sloped trend channel over the last couple of years and it just hit the lower rail of the channel. The weekly oscillators are hitting their lowest levels since April which is also the last time the stock hit the lower rail of the channel. The stock rallied sharply over the next few months.