Once again we saw eight of the ten main sectors fall and some of the losses were huge. The communications services sector experienced the worst loss at 4.7% and it was followed by the tech sector with a loss of 4.44%.

The other two both finished with losses over 2.5%.

The utilities sector led the way with a gain of 2.39% and the consumer staples sector (+0.44) was the only other sector in positive territory.

Because so many stocks are in oversold territory on their daily charts, my scans produced more bullish signals than bearish signals even with the big selloff yesterday.

The barometer rose slightly to 31.3 from 29.4 once yesterday’s results were added to the calculation.

It was hard to select a bullish trade after yesterday’s big selloff, but none of the stocks on the bearish list met my eye test. As a result, today’s trade idea is another bullish one and it is on Boeing (NYSE: BA). The company reported earnings yesterday morning and the company beat on the top and bottom line. The stock closed 1.3% higher on the day despite the selling. IBD gives Boeing a 92 on the EPS rating and a B on the SMR rating. 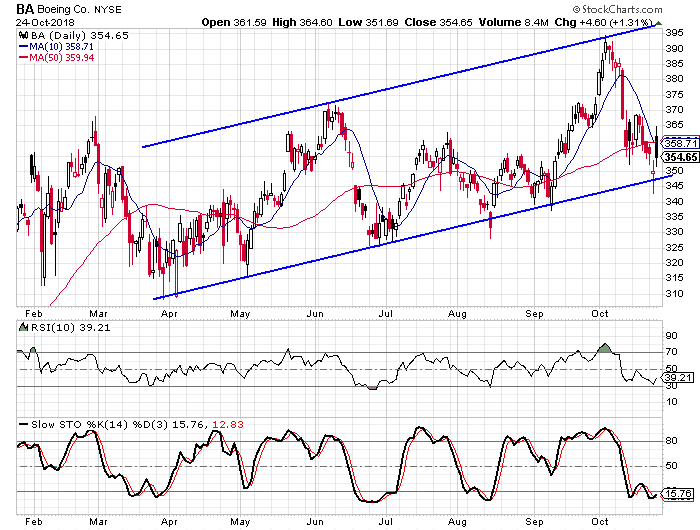 Boeing has been trending higher since April and there is a trend channel that has defined the up and down cycles. The stock just hit the lower rail of the channel and the stochastic readings just made a bullish crossover. I look for Boeing to move higher over the next few months, but it might need the market’s help to get back to the upper rail.

Buy to open the December $355-strike calls on BA at $18.00 or better. These options expire on December 21. The stock will have to get to $391 for these options to double on an intrinsic basis, but that is below the recent high and it will be well below the upper rail of the channel in a few weeks. I suggest a target gain of 100% with a stop loss at $348.