All four of the main indices closed lower on Tuesday, but they closed well off their lows. At their lows of the day, all four were down over two percent. The Nasdaq made the biggest turnaround and closed with a loss of 0.42%. The Dow lost 0.50% on the day and the S&P lost 0.55%. The Russell finished with the worst loss at 0.75%.

Eight of the ten main sectors closed lower yesterday with the energy sector experiencing the worst loss at 2.64%. The industrial sector dropped 1.63% and the materials sector lost 1.04%.

[hana-code-insert name=’adsense-article’ /]Those were the only three sectors that lost over one percent.

With the big reversal from the indices, my scans were decidedly bullish last night.

There were 97 names on the bullish list and 1o on the bearish side of the docket.

The barometer jumped back in to positive territory with a reading of 29.4.

As you might have surmised, the trade idea for today is a bullish one.

Going through all of the charts, there were a number of them that caught my eye, but there were several that are releasing earnings in the next week. I am not a fan of trading stocks ahead of earnings unless there are enough drivers behind the trade. One stock that I liked that has already announced earnings was Abbott Laboratories (NYSE: ABT). The company scores a 76 on IBD’s EPS rating and an A in the SMR category. 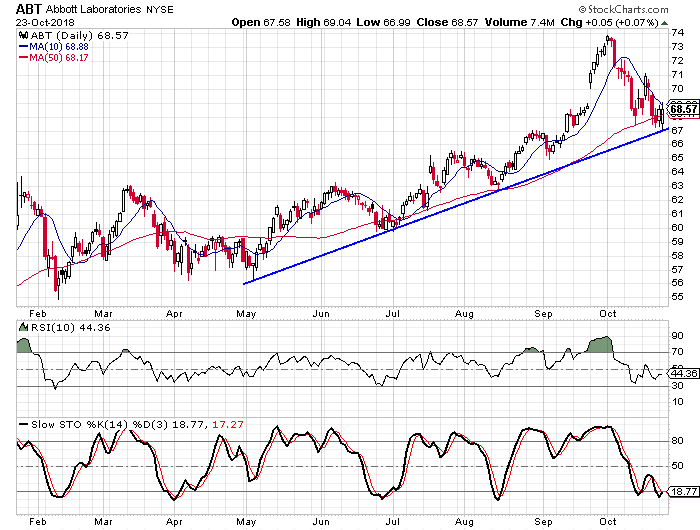 Abbott announced earnings on October 17 and that led to a slight dip in the stock. The dip brought the stock down to a trendline that connects the lows from the last six months and there is a secondary layer of support at the 50-day moving average. The daily stochastic readings are in oversold territory and I am looking for a bounce from the stock.

Buy to open the December $67.50-strike calls on ABT at $3.20 or better. These options expire on December 21. The stock will need to reach $73.90 for these options to double. That is right at the high earlier this month. I suggest a target gain of 100% and shutting the trade down if the stock closes below $67.00.