Monday started with momentum seemingly to the upside after big gains in the Asian markets, but the optimism quickly dwindled. The Nasdaq managed to stay in positive territory most of the day and finished with a gain of 0.26%

The Russell was also in positive territory most of the day, but finished with a minor loss of 0.11%. The Dow was the worst performing index with a loss of 0.50% while the S&P logged a loss of 0.43%.

[hana-code-insert name=’adsense-article’ /]The sectors were more lopsided to the down side than the indices were.

There were only two sectors in positive territory and they were led by the tech sector with a gain of 0.84%.

The consumer discretionary gained 0.39% as the only other sector in positive territory.

Those were the only two sectors that lost over one percent.

My scans made it three straight days of bearishly skewed results on Monday with 10 names on the bearish list and six names on the bullish list.

While the difference wasn’t all that great, it was enough to move the barometer in to negative territory at -7.5. That is the first negative reading since September 27.

For the third straight day, our trade idea is a bearish one. Ventas (NYSE: VTR) appeared on the bearish list last evening and the REIT doesn’t have very good fundamentals. The EPS rank is 28 and the SMR rating is a C. The company is set to report earnings on Friday and analysts expect the company to report EPS of $0.35. 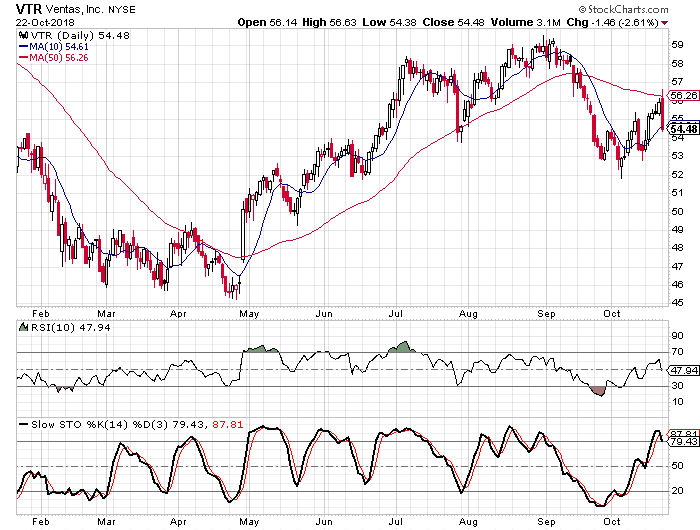 Ventas had been rising over the last few weeks, but ran into resistance at its 50-day moving average yesterday. The stock opened higher and then moved sharply lower. This caused a bearish engulfing pattern to form and that is a bearish sign according to candlestick charting. We also see that the daily stochastic readings made a bearish crossover yesterday after hitting overbought levels.

Buy to open the December $57.50-strike puts on VTR at $3.70 or better. These options expire on December 21. The stock will need to drop to the $50 area for these options to double. There is minor support just below the $52 level, but if the earnings disappoint that shouldn’t be an issue. I suggest a target profit of 100% with a stop at $56.50.