There was a big disparity in the performances of the indices on Friday. In the end there were three that lost ground while the Dow gained 0.26% as the only one in the green. The Russell was the worst performer with a loss of 1.2% and the Nasdaq lost 0.48% as the second worst performer. The S&P was in positive territory most of the day, but slipped in the closing minutes and ended up with a loss of 0.04%.

Like the indices, there was a great disparity in the performances of the sectors. There were only three sectors that gained ground on the day and they were led by the consumer staples sector with a gain of 2.28%.

[hana-code-insert name=’adsense-article’ /]The utilities sector gained 1.56% as the second best performer while the financial sector (+0.38%) was the other sector that finished in positive territory.

Of the seven sectors that finished with losses, the worst performance came from the consumer discretionary sector with a loss of 0.98%.

My scans had a bearish skew on Friday with 22 names on the bearish list and only two on the bullish list.

The barometer dropped from 50.4 to 6.8 once these results were added in to the calculation.

Today’s trade idea is a bearish one on Acadia Pharmaceuticals (Nasdaq: ACAD). The stock was on the bearish list Friday night and the company’s fundamental ratings are pretty bad with an EPS rating of 30 and an SMR rating of a D. The company’s earnings and sales have been flat over the last three years. 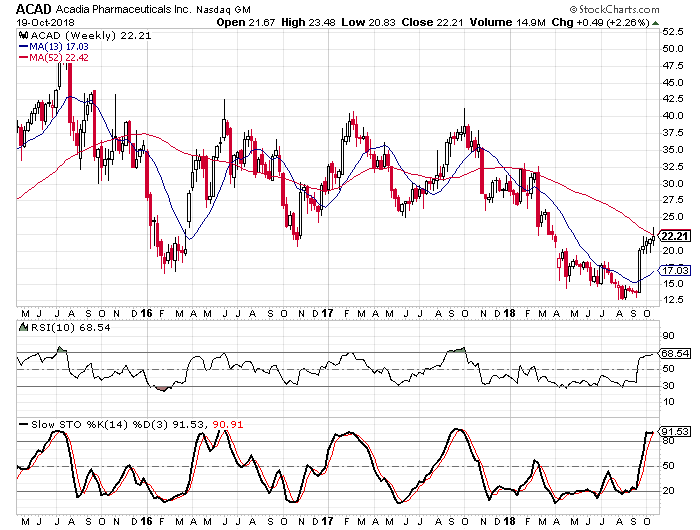 Acadia jumped sharply last month after an FDA breakthrough designation on its dementia drug. The stock has continued to edge higher in the last four weeks, but it is now facing resistance at its 52-week moving average. If you look back to the first quarter, the stock made several attempts to move above this trendline, but wasn’t able to break through it. I am expecting the stock to stall at the 52-week once again.

Buy to open the December $23-strike puts on ACAD at $3.50 or better. These options expire on December 21. There is a pretty good spread between the bid and the ask on these options, so I recommend trying to get in below the ask price. The stock will need to drop to $16 for these options to double, but given ACAD’s volatility I don’t think that is unreasonable. I suggest a target gain of 100% with a stop at $24.00.