Nine of the 1o main sectors fell yesterday with the utilities sector being the lone on in positive territory with a gain of 0.17%.

[hana-code-insert name=’adsense-article’ /]There were seven sectors that lost over one percent and the worst of the bunch was the tech sector with a loss of 1.96%.

The consumer discretionary sector was the second worst performer with a decline of 1.92%.

My scans dropped in sharply in terms of the number of signals produced.

There was only one stock on the bullish list last night and there were only three on the bearish list.

The barometer dropped from 100.8 to 50.4 as a result of the slight bearish skew.

After five straight bullish trade ideas, today’s is a bearish one.  L Brands (NYSE: LB) appeared on the bearish list and the company has very poor fundamentals. The EPS rating is a 26 and the company doesn’t even have an SMR rating because it doesn’t have a return on equity. 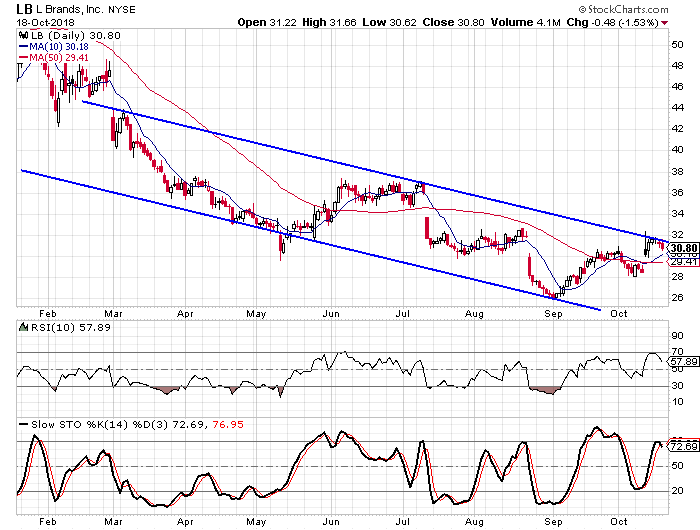 The chart on LB is an interesting one. The stock gapped lower in February and if we connect the high from the day with the high from July it forms a downward sloped trendline. The stock has been hovering near that trendline for the past week and wasn’t able to break through it even as the market soared on Tuesday.