After the big gains on Tuesday, all four indices lost ground on Wednesday, but the losses varied greatly. The Russell lost the most ground at 0.41% and the Dow was the second worst performer with a loss of 0.36%. The S&P lost 0.03% and that was the best performance of the bunch. The Nasdaq was close behind with a loss of 0.04%.

The sectors were split yesterday with four moving higher and six moving lower. The best performer was the financial sector with a gain of 0.93% and the healthcare sector notched a gain of 0.54% for the second best performance.

[hana-code-insert name=’adsense-article’ /]The consumer discretionary sector logged the worst loss at 0.82% while the industrial sector lost 0.70%.

My scans were far more balanced last night than they have been in the last three days.

One side note worth mentioning is that eight of the nine names on the bearish list were gold stocks or ETFs.

For today’s trade idea we are going back to a stock that we played back in early September. I suggested calls on Altria (NYSE: MO) when the stock had hit the lower rail of an upward sloped channel. The company’s fundamentals are above average with an EPS rating of 83 and an SMR rating of a B. 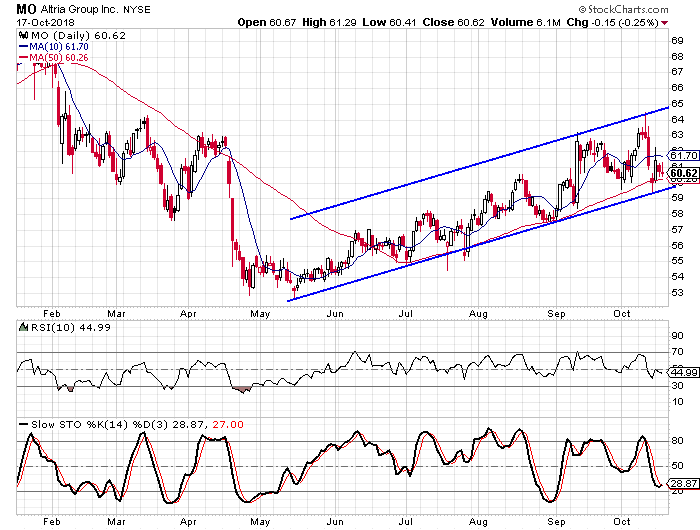 We see that the stock has hit the lower rail of the channel once again and it still has that second layer of support from its 50-day moving average. The oscillators aren’t as low as they were in September, but the stochastic readings just made another bullish crossover.