All four of the main indices moved sharply higher yesterday with all of them gaining over two percent. The Nasdaq led the way with a gain of 2.89% and it was followed by the Russell with a gain of 2.87%. The S&P and the Dow lagged the other two, but still managed gains of 2.15% and 2.17%, respectively.

All 10 sectors moved higher and all but one gained over one percent. The energy sector gained 0.86% and that was the worst performance of the 10.

[hana-code-insert name=’adsense-article’ /]The tech sector led the way yesterday with a gain of 3.01%.

My scans were once again decidedly bullish with 145 names on the bullish list and only one on the bearish list.

The barometer jumped to 147.8 once these numbers were added in to the equation and that is a new all-time high reading for the barometer.

Even though there were an abundance of stocks to choose from on the bullish list, the combination of the fundamentals and the charts were odd last night. There were a number of stocks with EPS ratings over 80 and with an SMR rating of an A, but the charts didn’t look that great on those. The one chart that I liked where the fundamentals were above average was Henry Schein (Nasdaq: HSIC). The medical supply company has an EPS rating of 74 and an SMR rating of a B. 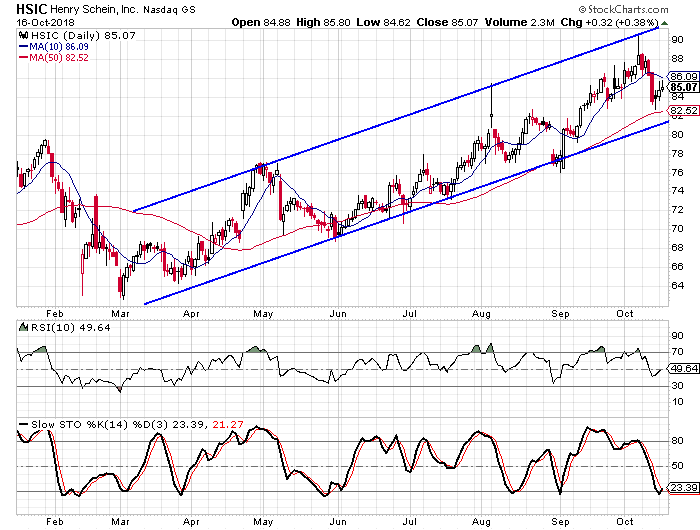 We see how a trend channel has formed over the last seven months. The stock didn’t drop down to the lower rail of the channel, but it did find support at its 50-day moving average. The stochastic readings just barely reached oversold territory and that is where they stopped in September and in mid-August before rallying. The rally through September