The indices waffled back and forth between positive and negative territory on Monday, but at the end of the day three of the four finished lower. The Russell was the only index to gain ground with a move of 0.41%. The Nasdaq was the only one of the four that was in negative territory all day and it was the worst performer with a loss of 0.88%. The Dow lost 0.35% and the S&P ended up losing 0.59%.

Seven of the 10 sectors moved lower on the day with the tech sector suffering the worst loss at 1.64%. The energy sector was the second worst performer with a loss of 0.84% and it was followed by the healthcare sector which lost 0.71%.

[hana-code-insert name=’adsense-article’ /]The consumer staples sector led the way on Monday with a gain of 0.61%.

The utilities sector (0.45%) and the industrial sector (0.22%) were the other two that finished with gains.

My scans came in very lopsided Monday night with 209 bullish readings and not a single bearish signal.

The barometer jumped to 124.7 and that is the second highest reading since I started keeping track in 2009.

The lowest reading came on July 6, 2010. That was a similar period to what we have been dealing with in the last few days.

The S&P had dropped 8.0% in the previous 12 days. In the 15 trading days following that huge positive reading, the S&P gained 8.5%. It was also a period where earnings season was kicking off.

With the huge bullish reading from the barometer, I felt another bullish trade idea was in order. Since we just had one on the Spyders, I am suggesting one on the iShares Russell 2000 ETF (NYSE: IWM) as a way to play what I expect to be a solid rally. The Russell gained 12.74% in the next 15 days after the huge barometer reading in 2010. 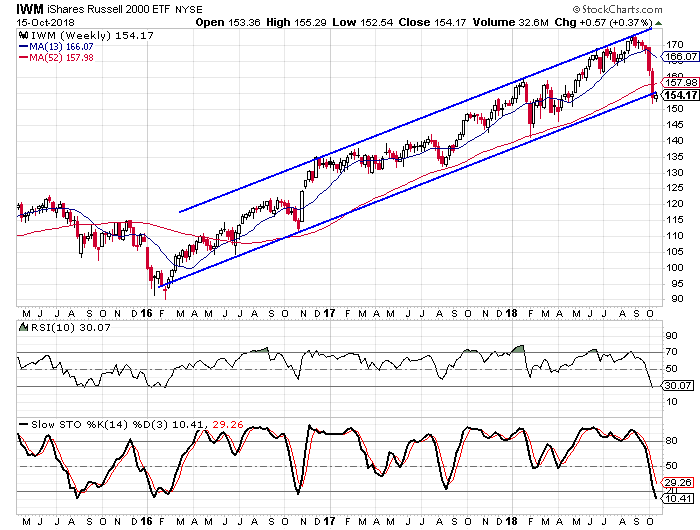 Looking at the weekly chart of the IWM we see that the fund has been trending higher since early 2016. The trend channel that has dictated the waves of lows and rallies is now coming in to play with the fund sitting right at the lower rail. The overbought/oversold indicators are at their lowest levels since the beginning of the current trend.