Stocks took another big hit on Thursday, but it wasn’t as bad as Wednesday. All four of the main indices saw sizable losses again and this time it was the Dow that got hit the hardest with a loss of 2.13%. The S&P lost 2.06% and the Russell lost 1.69%. The Nasdaq lost the least at 1.25%.

All 10 sectors moved lower again yesterday with the energy sector notching the worst loss at 3.4%. The second worst performing sector was the financial sector with a loss of 2.9%. In all there were six sectors that lost over two percent.

The consumer discretionary (-1.76%) and the utilities sector (-1.87%) were the other two sectors that managed to keep their losses under two percent.

The barometer slipped to 8.5 from 17 once these results were added in to the equation.

This isn’t because the Spyders were on the bullish list or the bearish list, but based on the chart I have been tracking and the massive selling over the last few days. I am looking for a bounce as the earnings season kicks off today. 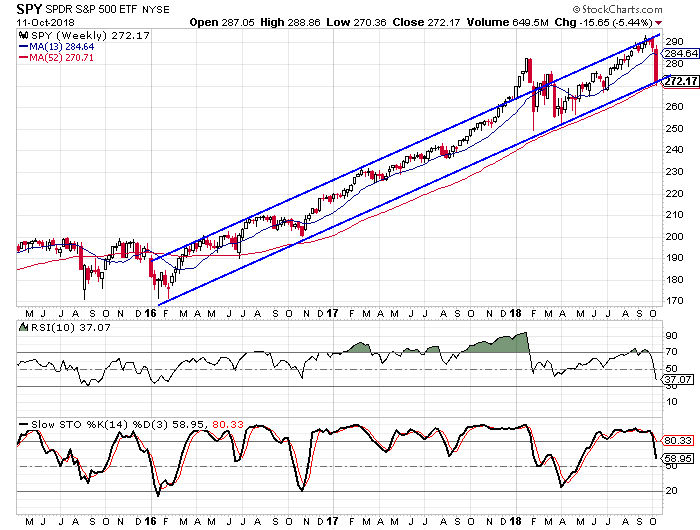 The Spyders hit their 52-week moving average yesterday and that is where the ETF found support back in April before it bounced. The moving average is also in synch with the lower rail of a trend channel that has defined the rally since the beginning of 2016. I am counting on that dual support level to hold once again.