Three of the four indices fell on Tuesday and it was the Nasdaq that gained ground with a move of 0.03%. That is a change from the Nasdaq being the index that saw the biggest losses over the prior three days. The biggest decline yesterday came from the Russell with a drop of 0.47%. The Dow lost 0.21% and the S&P lost 0.14%.

The sectors were mixed with a slight bearish skew to them. There were six sectors that moved lower and the worst performer by a wide margin was the materials sector which lost 3.33%.

[hana-code-insert name=’adsense-article’ /]The industrial sector was the second worst performer with a loss of 1.52%.

My scans remained bullishly skewed last night with 30 names on the bullish side of the ledger and 10 on the bearish side.

The barometer continued to rise, finishing the day at 23.

For today’s trade idea I was having a hard time choosing between a bullish one and a bearish one. In the end the bullish one won out and the company is Nike (NYSE: NKE). The company scores well in the fundamental categories with 78 on the EPS rating and an A on the SMR rating. The company saw a slight pullback after reporting earnings on September 25. 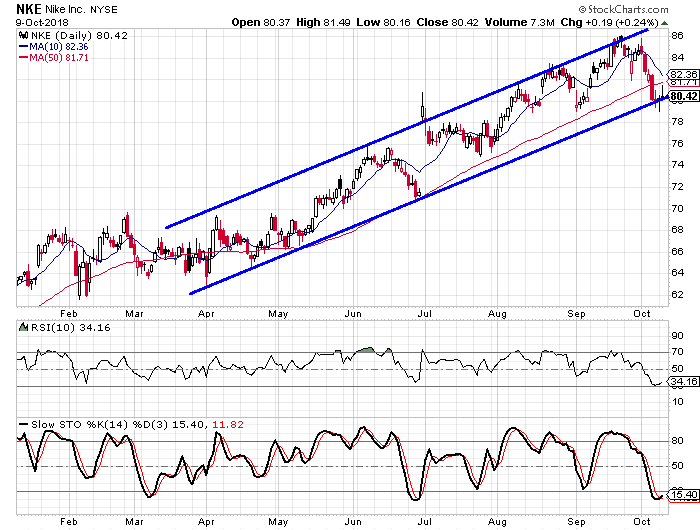 Buy to open the November $80-strike calls on NKE at $2.80 or better. These options expire on November 16. For these options to double the stock will need to rally by a mere 6.5%. That isn’t much of a bounce, so I suggest a target of at least 100% on this trade with a stop at $79.

For the record the bearish idea was on Schlumberger (NYSE: SLB).