Monday saw some strange moves by the indices. All four opened in negative territory and moved to positive territory shortly after the open. All four dipped sharply in the middle of the day and then recovered most of the midday losses. Despite all of the ups and downs, only the Dow (+0.15%) was able to finish in positive territory.

The Nasdaq was the worst performer once again and it was the only index that didn’t manage to reach positive ground in the afternoon. The final tallies showed a loss on the Nasdaq of 0.67%, a loss of 0.16% for the Russell, and the S&P lost 0.04%.

[hana-code-insert name=’adsense-article’ /]The sectors were evenly split with five moving up and five moving down.

The tech sector was the worst performer for a third straight day and this time the loss was 1.13%.

The telecom sector lost 0.82% as the second worst performing sector.

My scans turned more decidedly bullish last night with 58 names on the bullish side and six on the bearish list. The barometer jumped from 1.5 to 20.1 as a result of the bullish skew.

Given the bullish tone to the scans, if you guess today’s trade idea was a bullish one, you would be correct. Ross Stores (Nasdaq: ROST) appeared on the bullish list and the company has really impressive fundamental ratings from IBD. The EPS rating is a 90 and the SMR rating is an A. 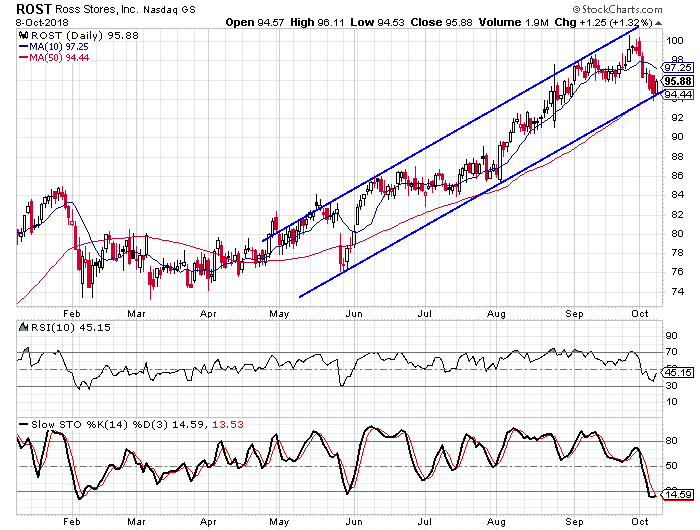 In addition to the impressive fundamental ratings, the chart for Ross is impressive as well. The stock has been trending higher since late May and gained over 30% from the low to the high. A trend channel has been dictating the move higher and the stock just hit the lower rail of the channel. After the stock hit the two valleys that formed the lower rail of the channel, it jumped over 12% each of those times. A similar move this time would put the stock over $105.

Buy to open the November $95-strike calls on ROST at $4.00 or better. These options expire on November 16. Given the two previous jumps listed above, I would suggest a target of 100% for this trade idea. That would mean the stock had reached $103 and probably won’t even be at the upper rail of the channel. I would suggest a stop at $93.50.