Friday saw all four indices drop significantly for a second straight day. The Nasdaq was the worst performer once again and this time it was a drop of 1.16%. The Russell lost 0.90% and the Dow lost 0.68%. The S&P had the best performance of the four with a loss of 0.55%.

Nine of the 10 main sectors dropped on Friday with the utilities sector being the lone one in the green with a gain of 1.53%.

[hana-code-insert name=’adsense-article’ /]The tech sector was the worst performer for the second straight day with a loss of 1.26%.

The telecom sector was the second worst performer with a loss of 1.08% and it was the only other sector that lost over one percent.

Despite the second straight day of selling, my scans produced more bullish signals than bearish signals on Friday.

There were 31 names on the bullish list and 21 on the bearish side. The barometer changed very little, falling from 1.8 to 1.5.

The one stock that stood out the most from both lists was Home Depot (NYSE: HD). The company scores a 93 on Investor’s Business Daily’s EPS rating scale and it gets an A in the SMR ratings. Earnings and sales have grown consistently and the profitability measurements are really good. 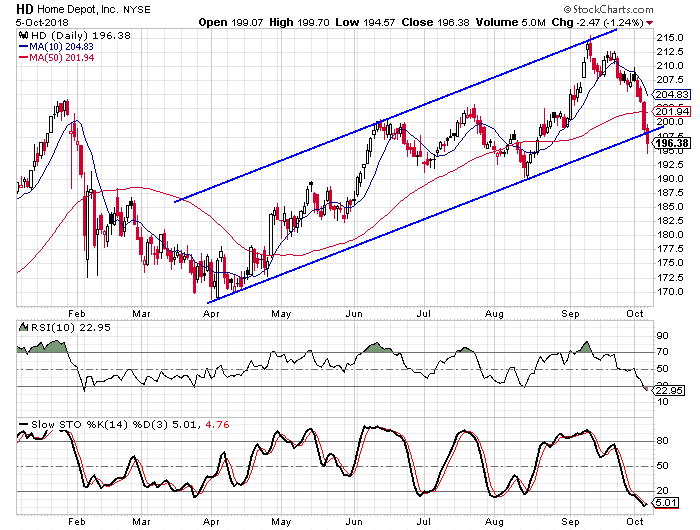 Looking at the chart you can see that the stock slipped with the rest of the market back in the first quarter. The stock hit a loss in early April and that low along with a low in August formed the lower rail of a trend channel. The stock just moved below that lower rail and it is oversold. The daily stochastic readings are the lowest they have been in over two years. I look for the stock to bounce back in the coming weeks.

Buy to open the November $195-strike calls on HD at $6.90 or better. These options expire on November 16. For these options to double, the stock will need to reach $208.80. That price level is approximately the midway point of where the channel is now. I suggest a target gain of 100% and a stop at $194.