Equities around the world got hit pretty hard on Thursday and all four of the main domestic indices took a hit. The Nasdaq suffered the worst loss at 1.81% and the Russell lost 1.46%.

The S&P notched a loss of 0.82% and the Dow was the best performer even with a loss of 0.75%. Fed Chairman Powell made some comments after the close yesterday that played a role in the selloff.

[hana-code-insert name=’adsense-article’ /]Eight of the ten main sectors dropped yesterday with the tech sector getting hit the hardest with a loss of 1.78%.

The consumer discretionary sector lost 1.54% and was the only other sector to lose more than one percent.

The financial sector led the way with a gain of 0.68% and the only other sector that managed a gain was the utilities sector which logged a gain of 0.55%.

The scans ended their run of bullishly skewed results last night as there were 43 names on the bearish list and 17 on the bullish list.

Adding the results in to the barometer calculation caused it to drop from 22.8 to 1.8.

The energy sector was well represented on the bearish list last night and today’s trade idea is from that sector. Pioneer Natural Resources (NYSE: PXD) doesn’t score too badly on the fundamental ratings with an EPS rating of 76 and an SMR rating of a B, but the chart got my attention. 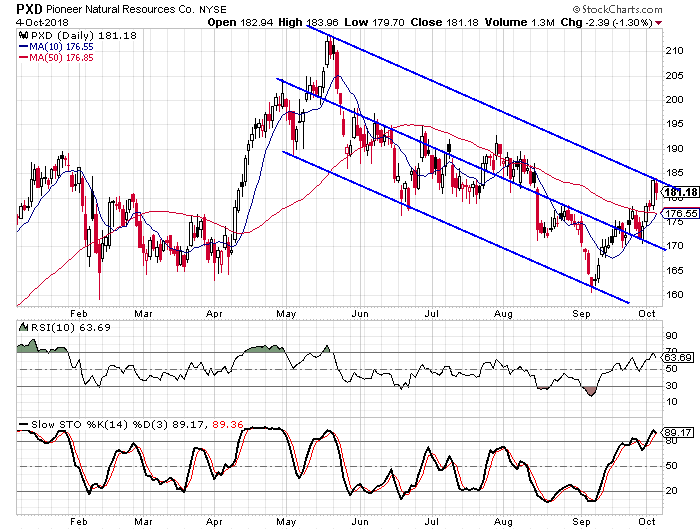 The stock has been trending lower over the last four and a half months and I created a channel that is a little different. The upper rail didn’t have a second connection point to connect with the high from May, so I started with the lower rail and then drew a parallel line for the upper rail. The stock is tremendously overbought and the RSI and stochastics were both in overbought territory since the high in May.

Buy to open the November $185-strike puts on PXD at $10.00 or better. These options expire on November 16. For these options to double, the stock will need to drop to $165. That means it wouldn’t have to break below the recent low in early September. I suggest a target gain of 100% and a stop at $184.