All four of the main indices moved higher on Wednesday and after being the biggest laggard over the last few days, it was the Russell that led the way with a gain of 0.96%. The Nasdaq had the second performance with a gain of 0.32% and the Dow logged a gain of 0.20%. The S&P lagged the other indices, but still managed a gain of 0.07%.

[hana-code-insert name=’adsense-article’ /]On the downside, the utilities sector was the worst performer with a loss of 1.20% after being the leading sector on Tuesday.

The consumer staples sector lost 1.07% as the second worst performer and it was the only other sector to lose over one percent.

The scans came in with a bullish skew for the fifth straight night.

After four straight bullish trade ideas, today’s is a bearish one.  Under Armour (NYSE: UA) was actually on the bearish list on Tuesday, but I liked the bullish trade on American Express better. I was also reluctant to recommend the trade after such a big drop on Tuesday. The company gets a 15 on the EPS rating and a D on the SMR rating. 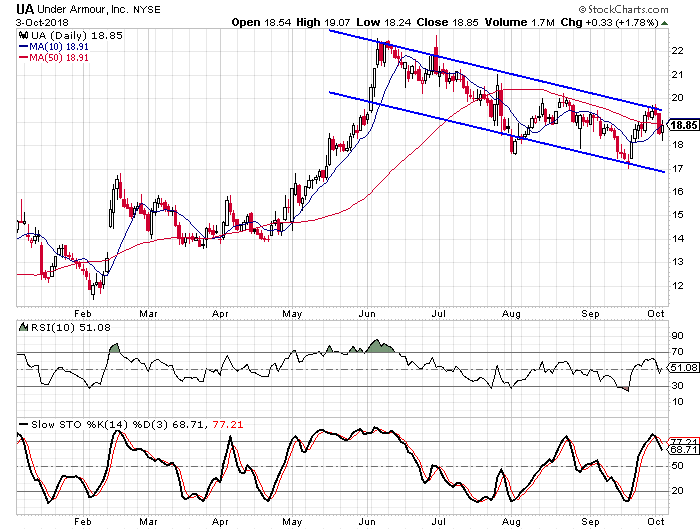 Under Armour has been trending lower and has formed a trend channel over the last four months. The stock just hit the upper rail of the channel and turned lower. The stock also saw a bearish crossover from the daily stochastic readings out of overbought territory. The last two times it was overbought and experienced a bearish crossover in the stochastics, the stock dropped over 20% and almost 16%.