Three of the four main indices moved lower on Tuesday with the Dow gaining 0.46% as the only one in the green on the day. The Russell was down 1.01% and that is the second straight day it has been down over one percent. The Nasdaq was down 0.47% and the S&P was down 0.04%. Futures were down sharply ahead of the opening bell, so seeing the Dow finish higher and the S&P logging a small loss is a victory of sorts.

There were six sectors that moved higher yesterday while four moved lower. The utilities sector led the way with a gain of 1.35% and that was a far better performance than any other sector.

[hana-code-insert name=’adsense-article’ /]The second best performer was the consumer staples sector with a gain of 0.57%.

The second worst performance came from the healthcare sector which lost 0.07%.

My scans remained bullishly skewed last night with 44 names on the bullish list and 21 on the bearish list.

The barometer rose to 26.9 from 21.9 after these results were added in to the equation.

With the scans remaining bullishly skewed, I have another bullish trade idea for today. American Express (NYSE: AXP) was on the bullish list and this is the second time it has been the subject of my daily options trade. It was a bullish trade back on June 25 that reached its target of 100%. The company’s EPS rating is 78 and the SMR rating is an A. 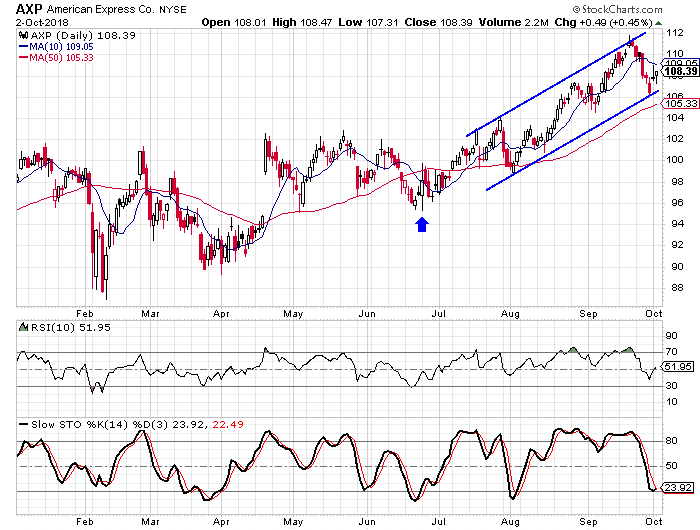 Buy to open the November $105-strike calls on AXP at $5.10 or better. These options expire on November 16. The stock will need to rally up to $115.20 for these options to double and that is just over $8.00 from the low last Friday. The bounces in June and August were both over $8.00, so it seems reasonable to expect a similar bounce this time. I suggest a target gain of 100% with a stop at $106.