The indices were evenly split yesterday with two moving higher and two moving lower. The Dow led the way with a gain of 0.73% and it was joined on the plus-side of the ledger by the S&P which gained 0.36%. The Russell was the biggest mover and it lost 1.39% on Monday. The Nasdaq lost a more modest 0.11%.

The sectors were skewed slightly to the green with six finishing higher while four finished lower. The energy sector gained 1.48% to lead the way and it was followed by the materials sector with a gain of 1.07%. Those were the only two that gained over one percent.

[hana-code-insert name=’adsense-article’ /]The telecom sector lost 0.50% as the worst performer and it was followed by the consumer discretionary sector with a loss of 0.29%.

My scans produced more bullish signals for a third straight night on Monday with 50 on the bullish list and 19 on the bearish list.

The barometer jumped up to 21.9 from 6.4 as a result of those numbers.

Today’s trade idea is a third straight bullish one and it is on commercial truck manufacturer PACCAR (Nasdaq: PCAR).

The company was on the bullish list and it has great fundamental ratings.

The EPS score is an 89 and the SMR rating is an A. The company showed strong earnings and sales growth in its most recent earnings report and it should benefit from the new trade agreement between the U.S., Mexico, and Canada. 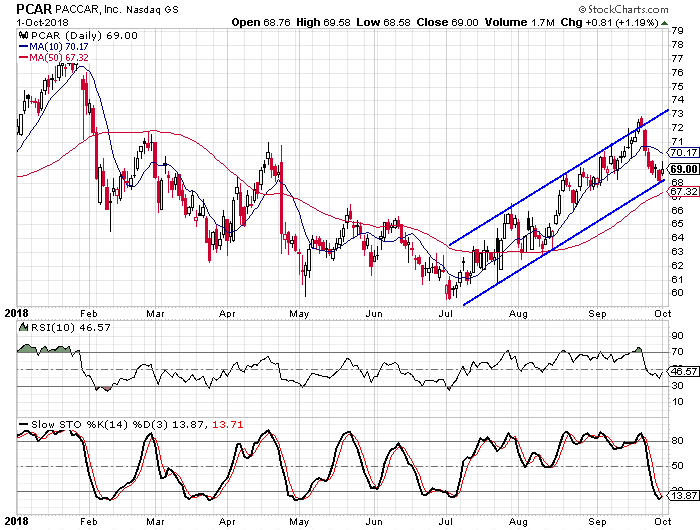 You can see on the chart that the stock has been moving higher since the beginning of June with a trend channel forming to guide the stock higher. The stock just hit the lower rail of the channel and bounced yesterday. That little bounce was enough to cause the stochastic readings to make a bullish crossover.

Buy to open the November $67.50-strike calls on PCAR at $3.50 or better. These options expire on November 16. These options will double in price if the stock reaches $74.50. Given the angle of the channel and where the upper rail will be in the next few days, it shouldn’t prevent the stock from hitting that price level. I suggest a target gain of 100% with a stop at $67.50.