Three of the four main indices moved higher yesterday with the Russell moving down by 0.04%. Stocks seemed to recover from the reaction to the Fed changing some wording in its policy statement. The Nasdaq led the way with a gain of 0.68% followed by the S&P with a gain of 0.29%. The Dow logged a gain of 0.22%.

The sectors were more evenly split on Thursday with six moving higher and four moving lower. The utilities sector bounced back with a gain of 1.07% as the leading gainer and as the lone sector to gain more than one percent. The tech sector finished second with a gain of 0.55%.

[hana-code-insert name=’adsense-article’ /]The materials sector was the worst performing sector with a loss of 0.94%.

The financial sector was down 0.36% on the day and that is the fifth straight day it has lost ground.

That is the first bullishly skewed daily reading in five days.

After four straight bearish trade ideas, I have a bullish one for you today.

The company is Plains All American Pipeline (NYSE: PAA) and it isn’t the typical trade idea. The company’s fundamentals aren’t as good as what we usually see from bullish trade ideas. The EPS rating is only a 68 and the SMR is a C, but the chart made up for the fundamentals. 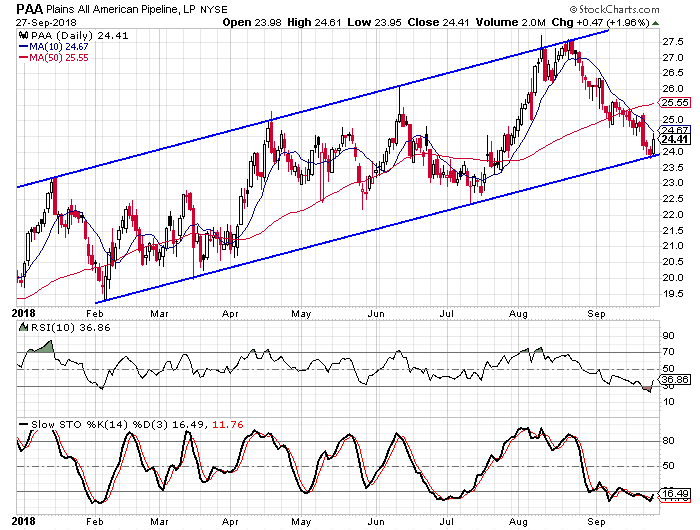 The stock has formed an upwardly-sloped trend channel and just hit the lower rail a few days ago. The previous times where the stock hit the lower rail, the ones that formed the channel, saw the stock rally by an average of 21%. I look for another strong rally this time around.

Buy to open the November $23-strike calls on PAA at $2.10 or better. These options expire on November 16. For these options to double, the stock will need to reach $27.40. That is only 11.4% from where the stock closed on Thursday. I would suggest taking half of the trade off the table at 100% and then letting the second half run to see if the stock can reach the top rail of the channel. A gain of 20% from the low on Wednesday would put the stock up at $28.74 and these options would produce a gain of 173% on the second half. I suggest a stop at $23.70.