The main indices were evenly split yesterday with the Nasdaq and Russell moving higher while the Dow and S&P moved lower. The Russell led the way with a gain of 0.2% and the Nasdaq gained 0.18%. The Dow had the worst performance with a loss of 0.26% and the S&P lost 0.13%.

The sectors were anything but evenly split on Tuesday. There were eight that moved lower and only two managed to gain ground. The energy sector led the way with a gain of 0.6% and the consumer discretionary sector was the only other sector in positive territory with a gain of 0.42%.

[hana-code-insert name=’adsense-article’ /]The utilities sector got hit the hardest with a loss of 1.35% and that is likely due to the impending Fed decision that will occur tomorrow and with analysts expecting another 0.25% hike in the Fed Funds rate.

My scans continued to register bearishly skewed results with 50 names on the bearish list last night and eight on the bullish list.

The barometer dropped to -35.6 from -22.6 as a result of the second straight big bearish skew.

With the greater number of bearish stocks and ETFs to choose from, the trade idea for today is another bearish one. The iShares MSCI EAFE ETF (NYSE: EFA) stood more than any other names on the list. Because it is an ETF we don’t have fundamental ratings, but the relative strength rating, accumulation/distribution rating, and group relative strength ratings are all average or worse. 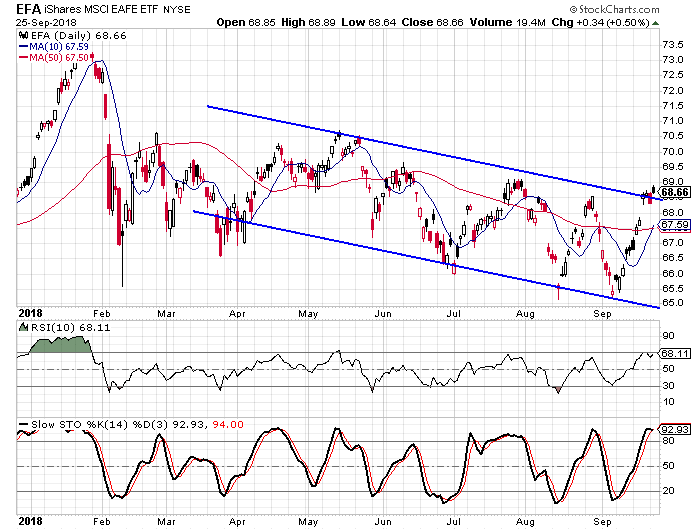 Buy to open the November $70-strike puts on EFA at $1.75 or better. These options expire on November 16. These options will double with a move down to $66.50 by the fund and that is only 3.15% below the current price. I recommend a two-tiered approach to this trade idea with the goal of closing the first half at a 100% gain and leaving the second half open to see if the fund moves back down to the $65.50 level where you can get over 150% on the second half. I suggest a stop-loss at $69.20.