Three of the four main indices fell yesterday only instead of the Dow being the one in positive territory it was the Nasdaq (+0.08%) that bucked the trend. The Dow lost 0.68% on the day and that was the worst performance of the four. The Russell lost 0.41% and the S&P lost 0.35%.

Three of the sectors moved higher on Monday while the other seven lost ground. The energy sector was far and away the best performer of the bunch with a gain of 1.46%. The tech sector (+0.50%) and the healthcare sector (+0.16%) were the other two in positive territory.

[hana-code-insert name=’adsense-article’ /]The industrial sector was the worst performer on the day with a loss of 1.71%.

Industrials, consumer staples, and materials were hurt by the latest round of tariffs in the trade war.

My scans turned decidedly bearish last night with 81 names on the bearish list and only nine on the bullish list.

The one stock the stood the most last night was Liberty Global Class A shares (Nasdaq: LBTYA). The company was on the bearish list and its fundamental rankings are pretty poor. The EPS rating is a 37 and the SMR rating is an E. 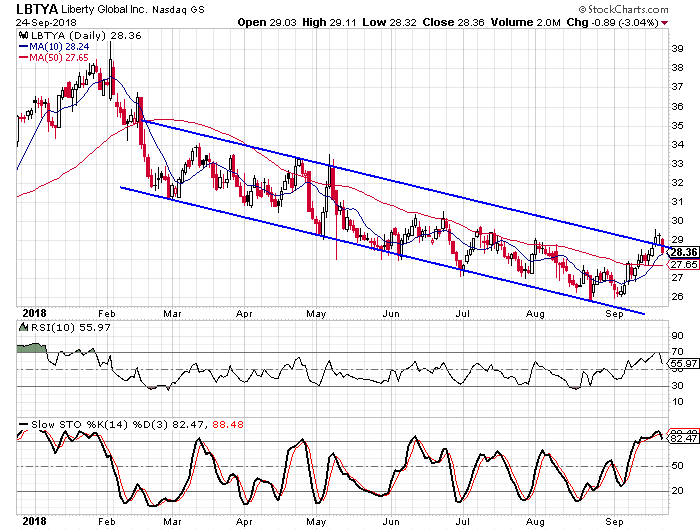 The chart shows how the stock has been moving lower inside a trend channel for the last seven months. The stock just hit the upper rail of the channel. The 10-day RSI and the stochastic readings were both in overbought territory and the RSI has now moved out and the stochastics just made a bearish crossover.