Friday was a triple witching Friday and that seemed to have a minimal impact on the market. Three of the four main indices moved lower on the day while the Dow managed to log a gain of 0.32%. The Nasdaq suffered the worst loss at 0.51% and it was followed closely by the Russell with a loss of 0.46%. The S&P suffered a minor loss at 0.04%.

[hana-code-insert name=’adsense-article’ /]The consumer discretionary sector was the worst performer with a loss of 0.43%.

The financial sector and the tech sector tied for the second worst performance with matching losses of 0.39%.

My scans shifted back to a bearish skew on Friday, but the difference between the two lists was minimal.

The barometer remained in positive territory with a reading of 7.4.

The stock that jumped out at me the most was McKesson (NYSE: MCK) and it was on the bearish list.

We played the stock before back in August. That trade idea didn’t hit its 100% target, but it did reach a gain of 75%. The company scores a 66 on IBD’s EPS rating system and it scores a C on the SMR rating system. 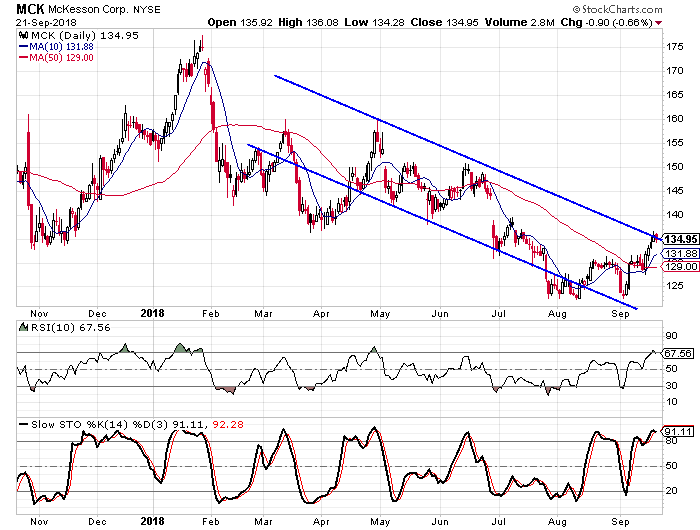 You can see on the chart that the stock has been trending lower since January and a trend channel has formed over the last six months. The stock is at the upper rail of the channel currently and both the stochastic readings and the 10-day RSI hit overbought territory last week.