All four of the main indices moved significantly higher on Thursday with the Nasdaq leading the way with a 0.98% gain. The Russell and the Dow followed closely behind with gains of 0.96% and 0.95%, respectively. The S&P lagged the other three indices, but still notched a gain of 0.78%.

Like we saw with the indices all the sectors moved higher yesterday. The biggest gains were had by the consumer staples sector (+1.23%), technology sector (+1.14%), and the materials sector (+1.03%). Those were the only three that logged gains over one percent.

[hana-code-insert name=’adsense-article’ /]The biggest laggard on the day was the energy sector with a gain of only 0.03%.

Those were the only three that gained less than a quarter of a percent.

Adding those figures in to the calculations caused the barometer to move back in to positive territory with a reading of 8.2.

There were a number of stocks on the bullish list with strong fundamental ratings, but the one that jumped out at me the most in terms of both the fundamentals and the chart was  PayPal (Nasdaq: PYPL). The company’s EPS score is a 92 and the SMR rating is an A. 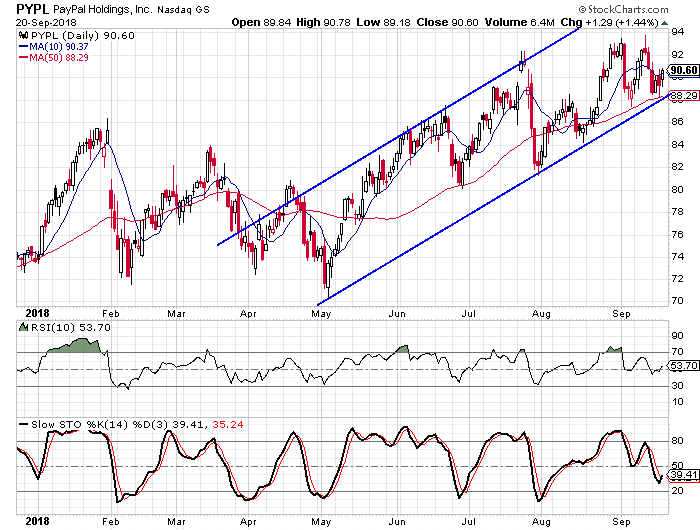 If you are a regular reader of my articles you know I like trend channels. PayPal has one of the steepest trend channels I have seen in recent years. The stock was just above the lower rail two days ago and it bounced off of its 50-day moving average which is right in line with the lower rail. I look for a sizable rally from here.

Buy to open the November Week 1 $88-strike calls on PYPL at $5.30 or better. These options expire on November 2. The stock will need to reach $98.60 for these options to double. Given the jumps off the lower rail in May and August, along with jump off the 50-day in late June, I think a 100% target gain is reasonable. I would suggest a stop at $88.00.