The main indices were split down the middle yesterday with two finishing higher and two finishing lower. The Dow led the way with a gain of 0.61% and the S&P joined it in positive territory with a gain of 0.12%. The Russell was the worst performer of the bunch with a loss of 0.52% while the Nasdaq logged a more modest 0.08% loss.

[hana-code-insert name=’adsense-article’ /]On the positive side, the financial sector led the way with a gain of 1.72% and the materials sector gained 1.07% as the second best performer.

Those were the only two sectors that gained over one percent.

The positive net reading of +2 was the first bullish skew in four days.

Today’s trade idea is a bullish one and it’s on one of the most widely followed stocks around. Facebook (Nasdaq: FB) has been trending lower since the end of July. The earnings report disappointed for new subscribers. Even with the disappointing results, the company still gets an EPS rating of 96 and an SMR rating of an A. 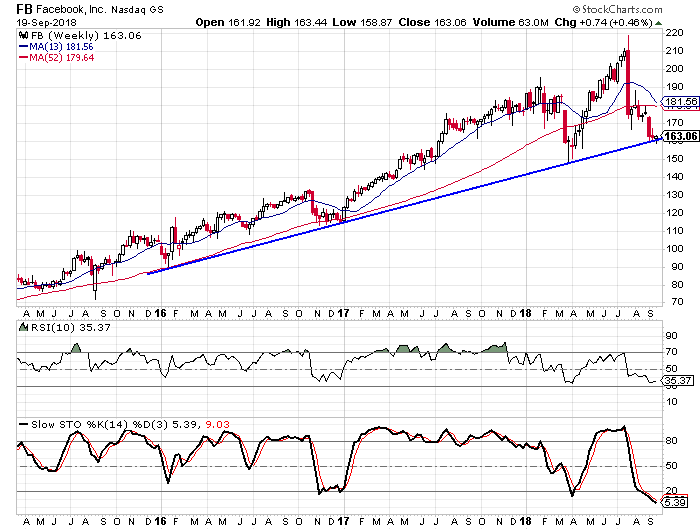 The stock has been under pressure, but it is still above the trendline that connects the lows from the last few years. The weekly stochastic readings are in oversold territory and are the lowest they have been in the last three and a half years. I look for the stock to rally in the coming weeks and based on the rallies this past spring and the one early in 2017, I see it being a move of at least 20 to 25% in the next few months.