All four of the main indices moved higher on Tuesday with the Nasdaq leading the way with a gain of 0.76%. The Dow was a close second with a gain of 0.71%. The S&P gained 0.54% while the Russell lagged slightly but still notched a gain of 0.48%. Interestingly the gains came after the latest tariff threats were announced by both the U.S. and China.

Eight of the 10 main sectors moved higher on the day. The consumer discretionary sector led the way with a gain of 1.28% and it was the only one with a gain over one percent. The industrial sector was the second best performer with a gain of 0.9%.

These two sectors were the only two in negative territory on the day.

Despite the gains from the indices and sectors, the scans produced more bearish signals than bullish signals for a third straight night.

Today’s trade idea is a bearish one and it is on a household name that has been in the news this week. Coca Cola (NYSE: KO) made news earlier this week when it announced it was considering cannabis infused soft drinks. The company’s fundamentals are average with an EPS rating of 49 and an SMR rating of a B. 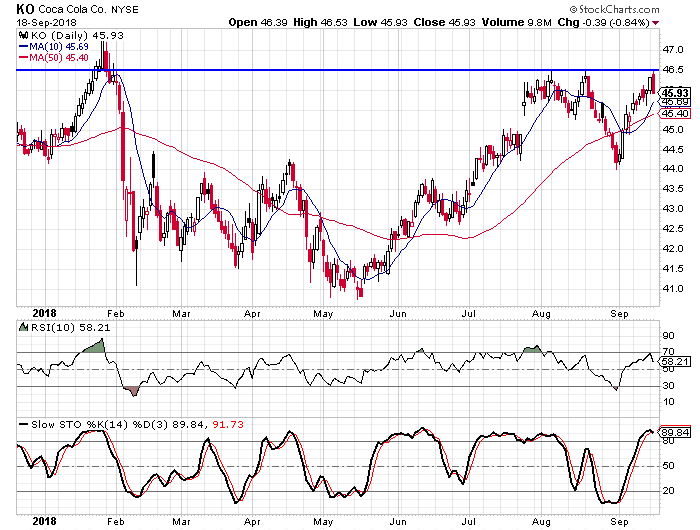 The stock has had trouble moving above the $46.50 level and dropped after hitting that price in early August and again a few weeks later. The stock is overbought and we just saw a bearish crossover from the stochastic readings. When both the RSI and stochastics have been in overbought territory and the bearish crossovers occurred in the past nine months, the stock has dropped.

Buy to open the November $47-strike puts on KO at $1.50 or better. These options expire on November 16. These options will double if the stock drops to $44 and that is only 4.2% below yesterday’s closing price. I suggest a target gain of 100% for this trade idea with a stop-loss at $46.70.