For the second straight day, three of the four main indices moved higher on Friday. The Nasdaq was the lone index to lose ground with a small 0.05% decline. The Russell led the way with a gain of 0.43%. The Dow and S&P both notched gains of 0.03%.

The sector performances didn’t match the index performances as only three of the ten moved higher on the day. The telecom sector was unchanged on the day, leaving six sectors in the red. The utilities sector was the worst performer with a loss of 0.53% and it was followed by the consumer discretionary sector which dropped 0.37% on the day.

[hana-code-insert name=’adsense-article’ /]The financial sector led the way on Friday with a gain of 0.71%.

The energy sector logged a gain of 0.53% and the industrial sector gained 0.5% as the third sector that finished in the green.

The scans flipped on Friday night as there were more names on the bearish list than there were on the bullish list.

The final tally was 22 to 17, so it wasn’t a huge discrepancy, but it was a little surprising given the bullish skews we have seen in the prior three days.

The barometer dropped from 41.8 to 23.6 as a result of the slight bearish skew.

Despite the slight bearish skew, today’s trade idea is a bullish one and it is on the iShares Nasdaq Biotechnology ETF (Nasdaq: IBB).

As a group, the healthcare sector has some of the highest rated stocks based on Investor’s Business Daily’s EPS ratings and SMR ratings. Going through the IBD data tables, there were 37 stocks with an EPS rating over 80 and an SMR rating of an A. 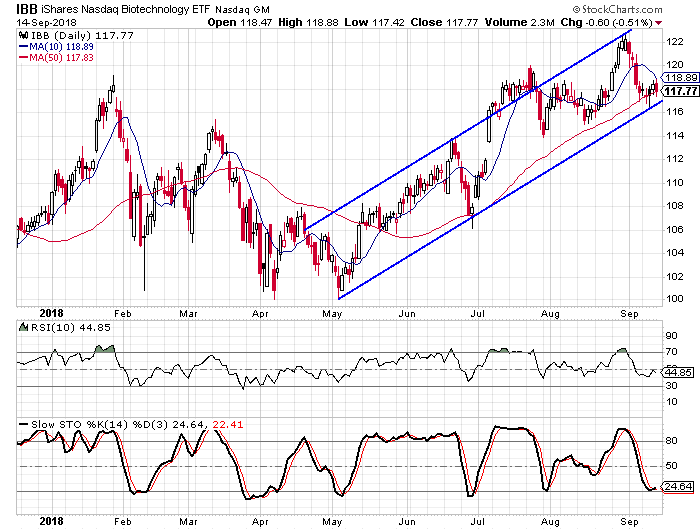 While the fundamentals for the healthcare sector as a whole are impressive, we are focused on the biotech industry specifically with this trade idea. As you can see on the chart, the ETF has formed a trend channel over the last four and a half months. The ETF just hit the lower rail of the channel and looks ready for another rally. What is especially impressive are the sharp gains from the lows in May and late June. The ETF gained over 10% each time and it did so within a month and a half.

Buy to open the November Week 1 $115-strike calls on IBB at $5.30 or better. These options expire on November 2. Given the timeframes of the previous rallies these options made the most sense. The options will double in value if the ETF gains 6.6%, so that seems like a reasonable target. I suggest a target gain of 100% with a stop at $116.25.