Three of the four main indices moved higher on Thursday with the Russell (-0.16%) being the lone one in the red. The Nasdaq led the way with a gain of 0.75% and that was primarily due to a rally in tech stocks. The Dow finished with a gain of 0.57% and the S&P logged a gain of 0.53%.

Eight of the ten sectors moved higher on the day with a couple of them garnering gains of over one percent. The healthcare sector led the way with a gain of 1.21%. The previously mentioned tech sector notched a gain of 1.15%.

[hana-code-insert name=’adsense-article’ /]The consumer staples sector lost 0.16% as the worst performing sector and the financial sector (-0.14%) was the other sector in the red.

The scans were bullishly skewed again last night, but the differential between the two lists dropped considerably.

The barometer dipped slightly to a reading of 41.8 after the big bullish skews on Tuesday and Wednesday.

There was one stock that stood out and it was due to both its fundamentals and its chart.

The stock is Texas Instruments (Nasdaq: TXN) and it ranks very highly on both of the Investor’s Business Daily ratings that I like to watch. The EPS rating is a 94 and the SMR rating is an A. 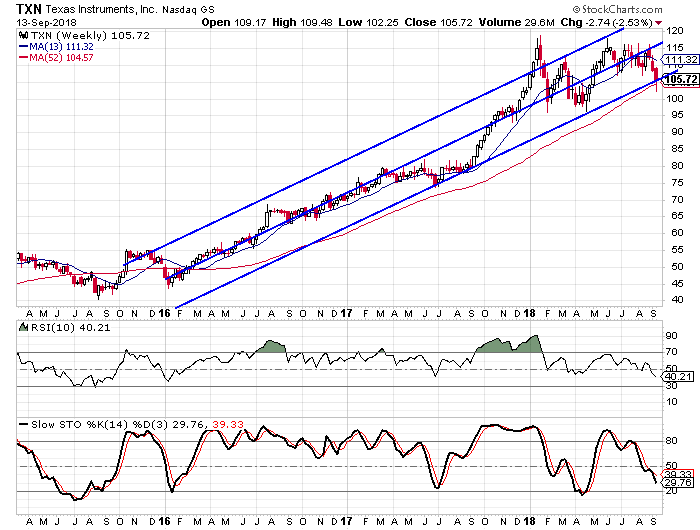 Like many chip stocks, Texas Instruments has been moving lower in recent weeks, but I think the stock is ready for a reversal. The stock dropped below its 52-week moving average earlier this week, but has rallied back above the trendline. The lines on the chart represent a standard deviation channel (the two outer bands) with a standard deviation of 0.5. The middle line is a regression line. As you can see, the stock hasn’t been outside the channel very often in the last few years.

Buy to open the Jan19 $105-strike calls on TXN at $6.60 or better. These options expire on January 18, 2019. I wanted to go out a little farther than the October series of options to give this trade time to work. Unfortunately the November series isn’t available yet so I thought the January expiration would be the best. For these options to double the stock will need to move up to $118.20 and that is just below the high hit this past January. I suggest a target gain of 100% with a stop at $102.